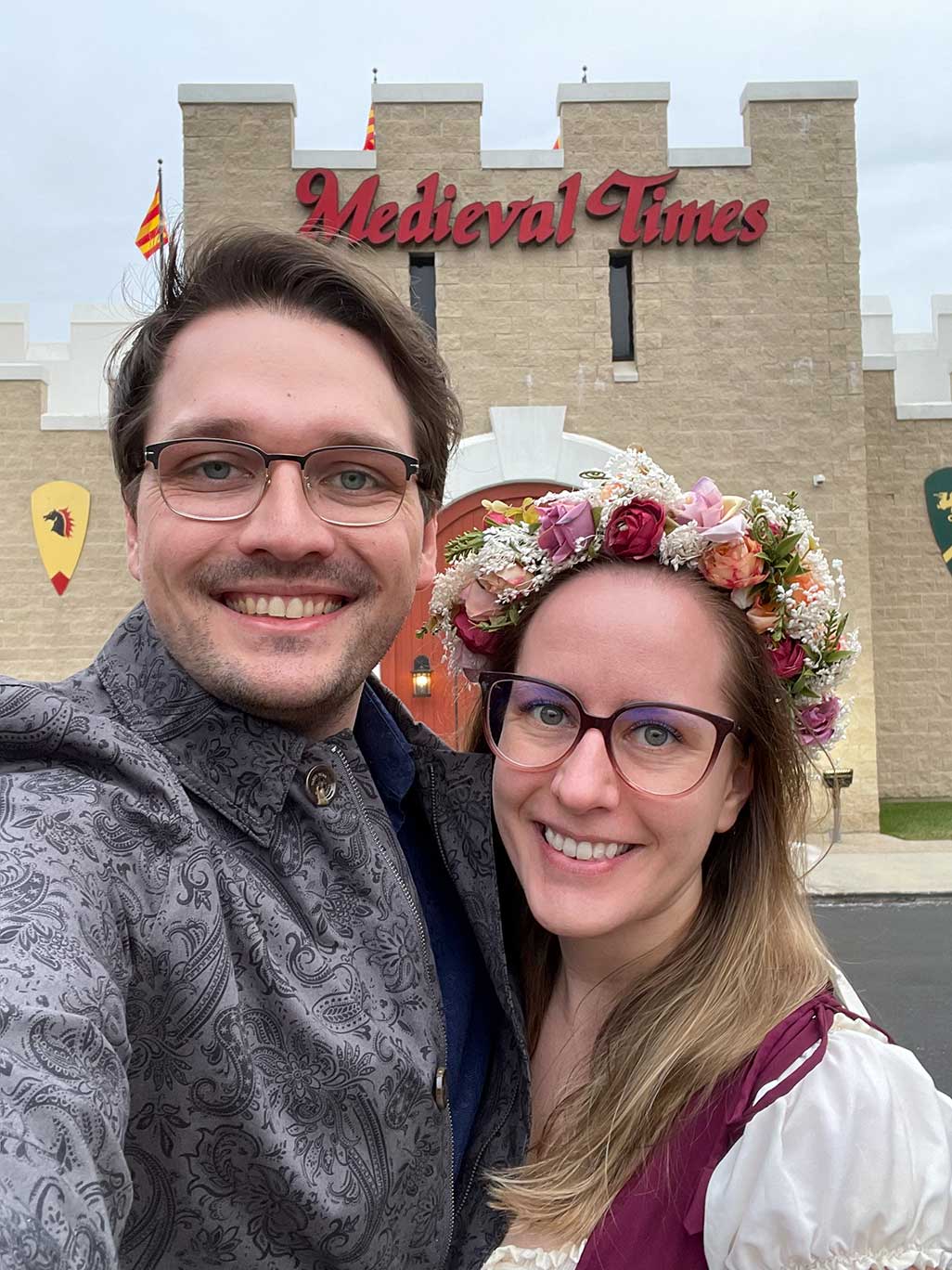 Since moving away from our families in California, we've cherished the generosity and love from our new friendships here in Chicagoland. These wonderful people have become like family to us, inviting us to holiday meals with their relatives and sharing their traditions so we never feel alone. 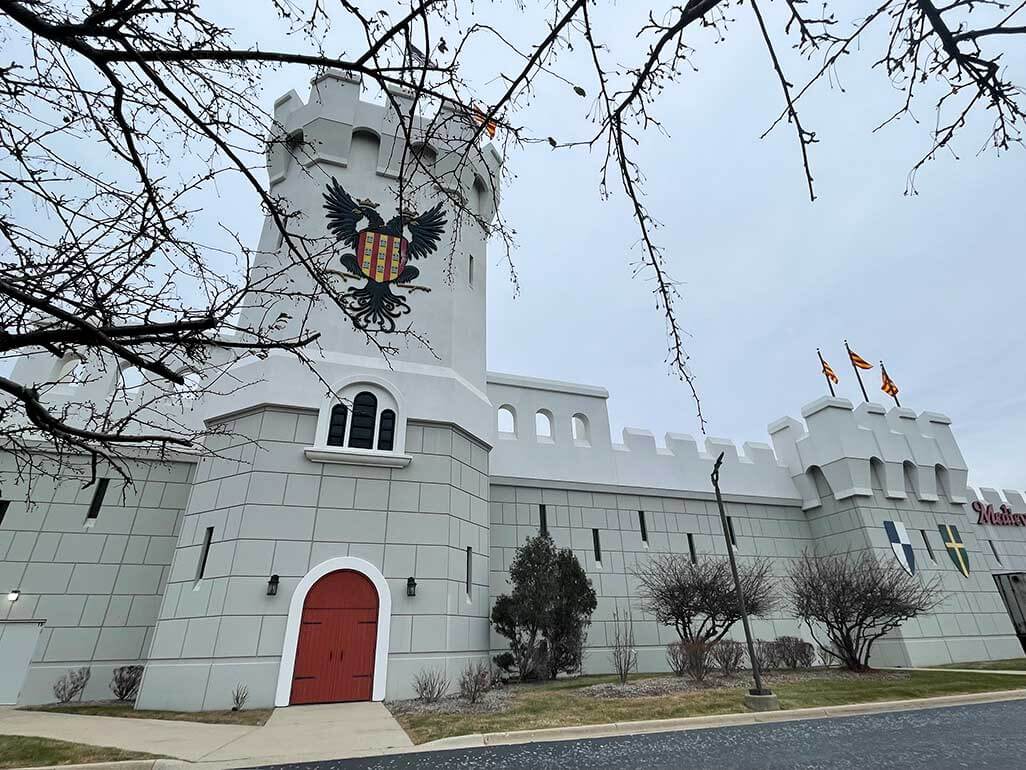 This Thanksgiving, we had the option to join our friends' holiday parties, but wanted to do something completely different instead of the typical cook-all-day-and-eat-turkey routine. Oh don't worry, poultry and potatoes were still involved, but we opted to spend the evening watching jousting and sword fighting at Medieval Times Dinner and Tournament in Shaumberg, IL. 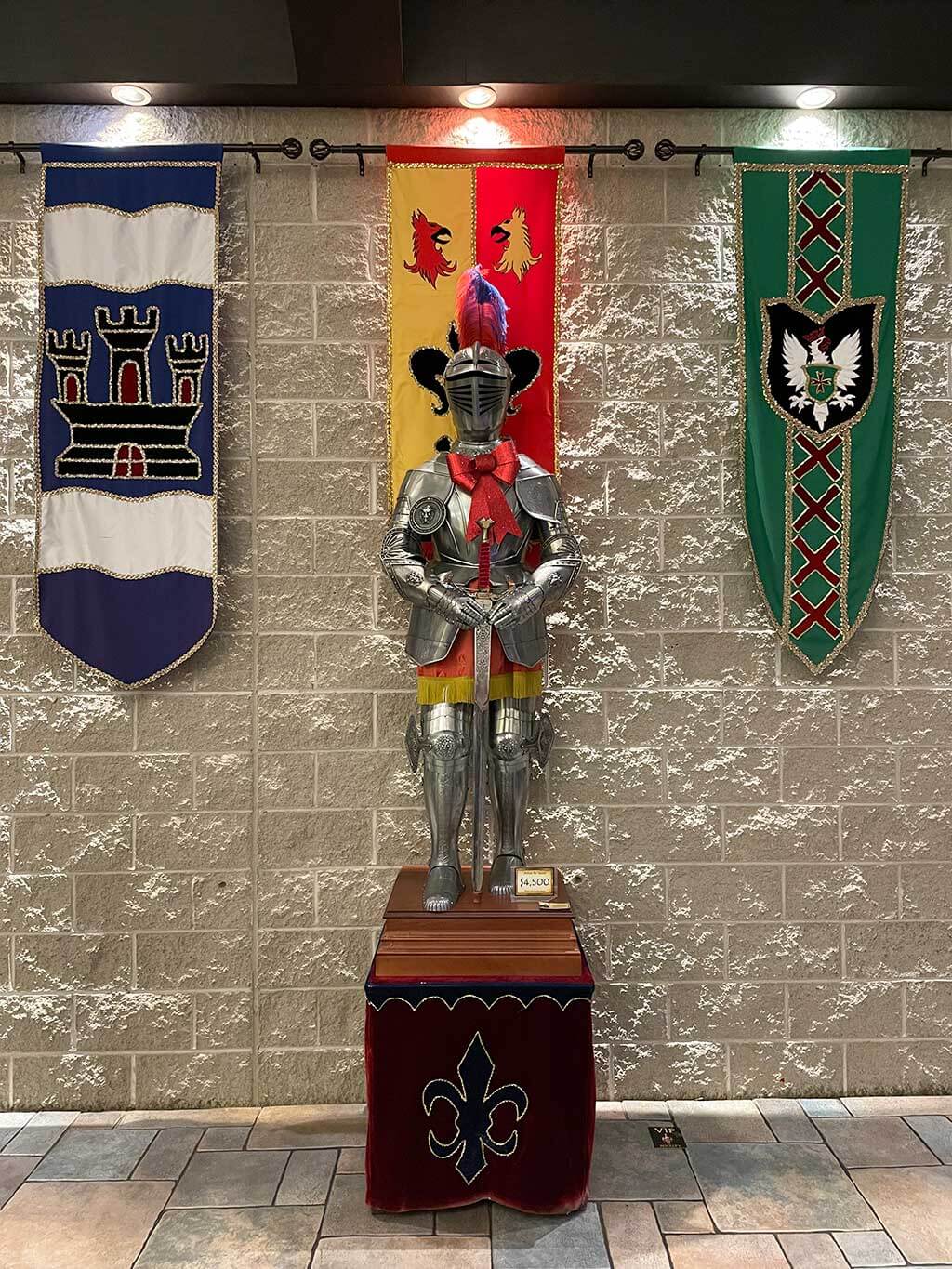 My colleague from work was kind enough to lend me her renaissance fair gown for the occasion, so we rolled up to the castle dressed ready to step back in time.

Have you ever had dinner inside a castle? 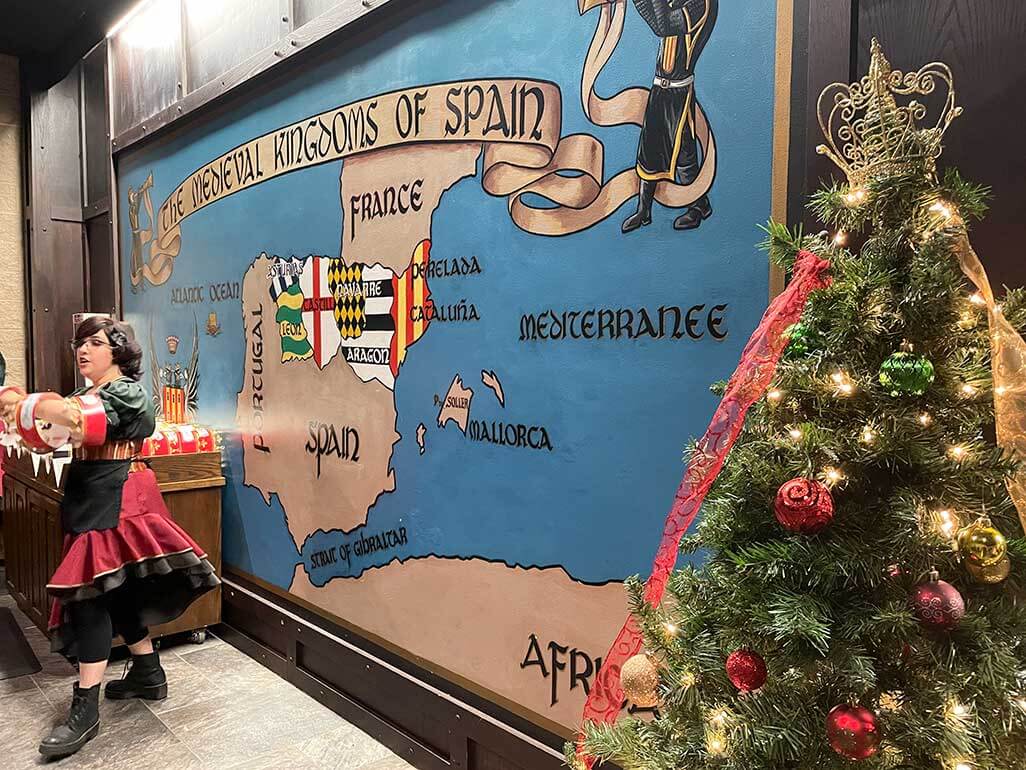 Greeted by a host of helpful wenches (their word), we were ushered past this map showing that we had arrived in the heart of medieval Spain, just in time to see brave knights from six kingdoms compete for the title of champion. 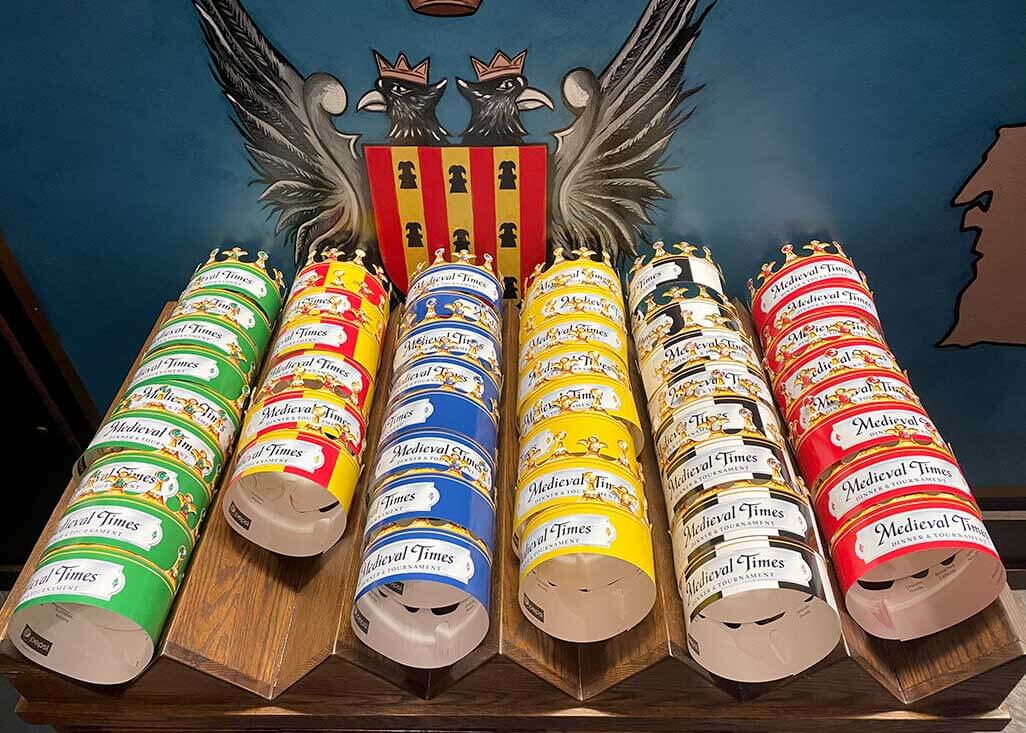 They handed us bejeweled crowns to don in support of our challenger, the Red and Yellow Knight from Perelada, well known for his superior swordsmanship.

The other contestants included: 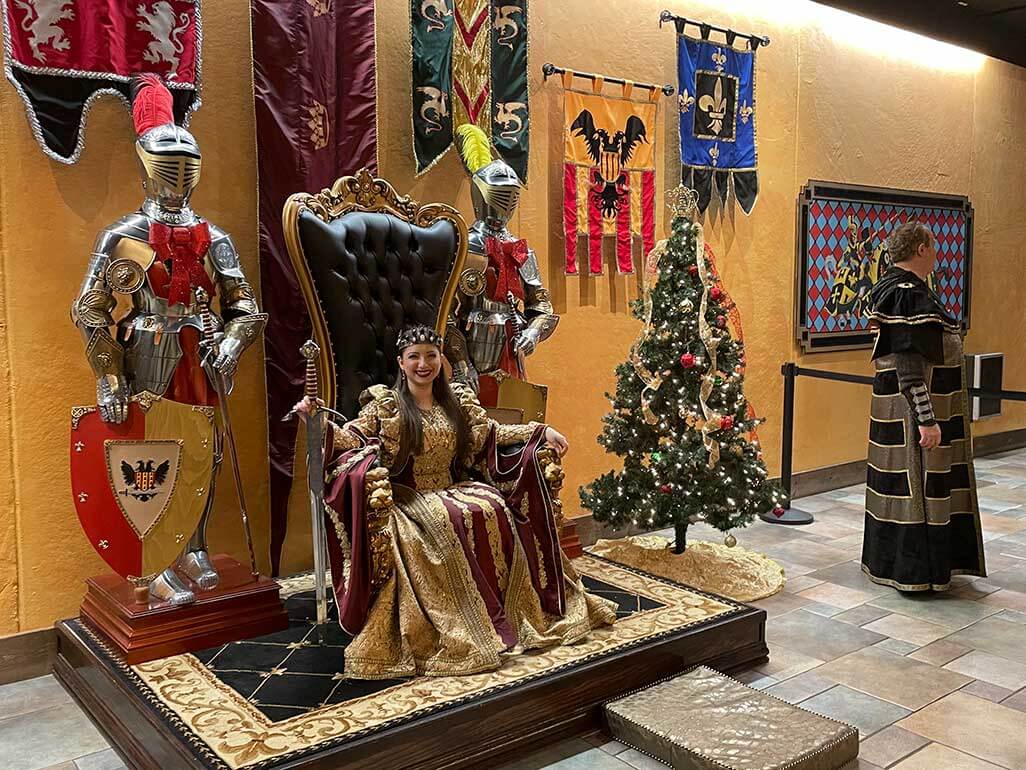 Queen Doña Isabella nodded to us from her royal throne while holding on to her family's ancestral sword which she kept close to defend her hard-fought position of power in the male-dominated kingdom. 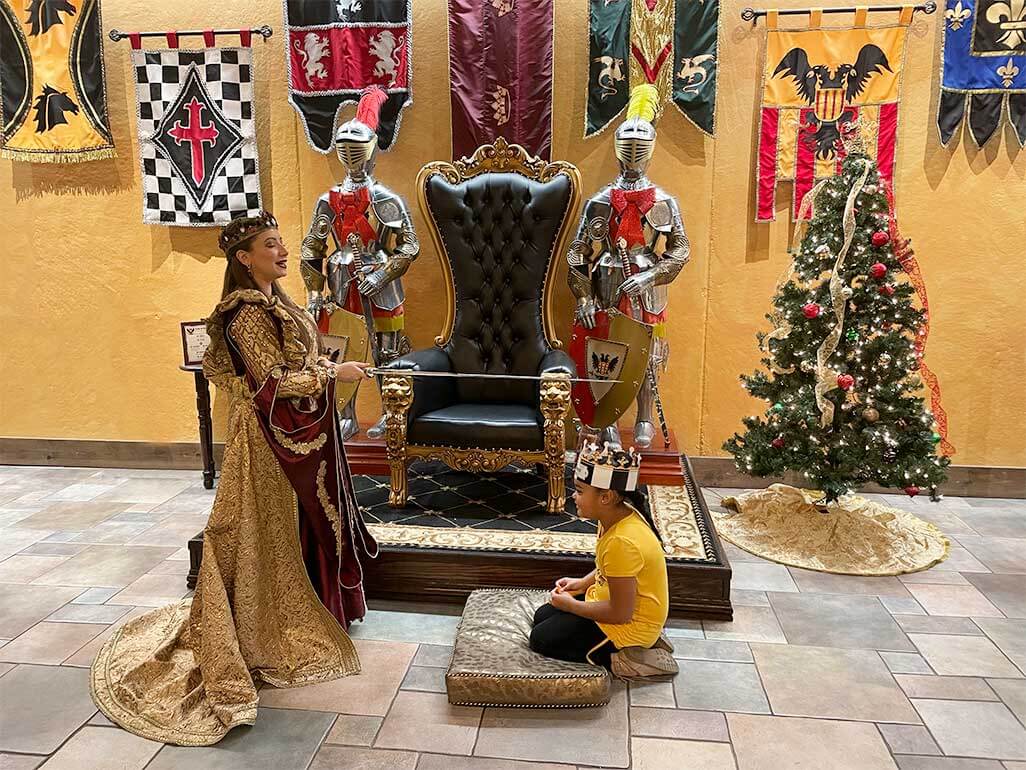 She also used it for the handful of knighting ceremonies performed just before the tournament began (for anyone willing to pay). 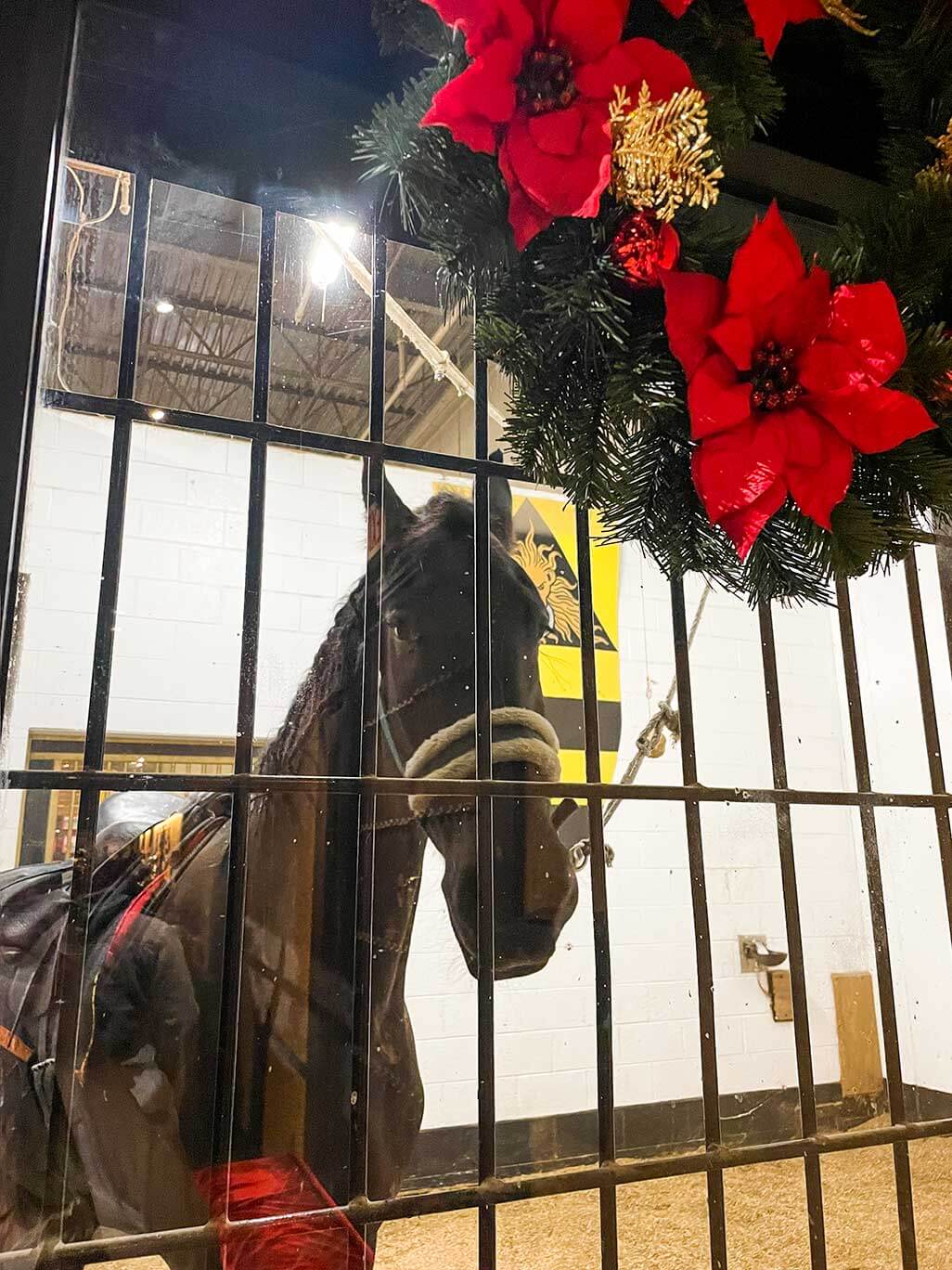 At the back of the hall, we visited the stables to see some of the beautiful horses that would perform that night. Before we went further, I made sure to confirm that the horses are well cared for, receiving plenty of rest and food for their hard work in the entertainment industry. Apparently, they are. 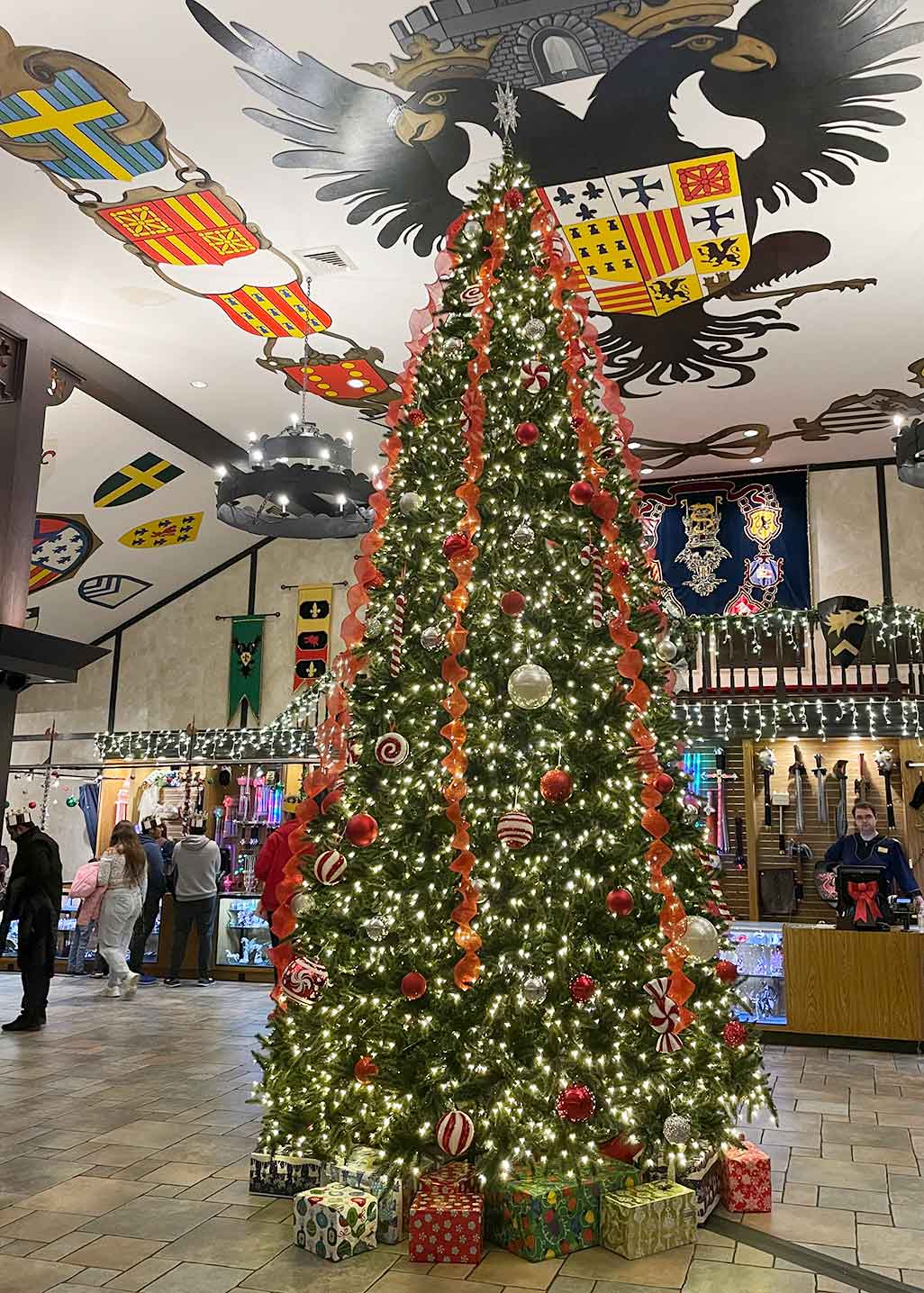 After an hour of milling around the castle foyer, a herald welcomed us into the main arena to find our seats. 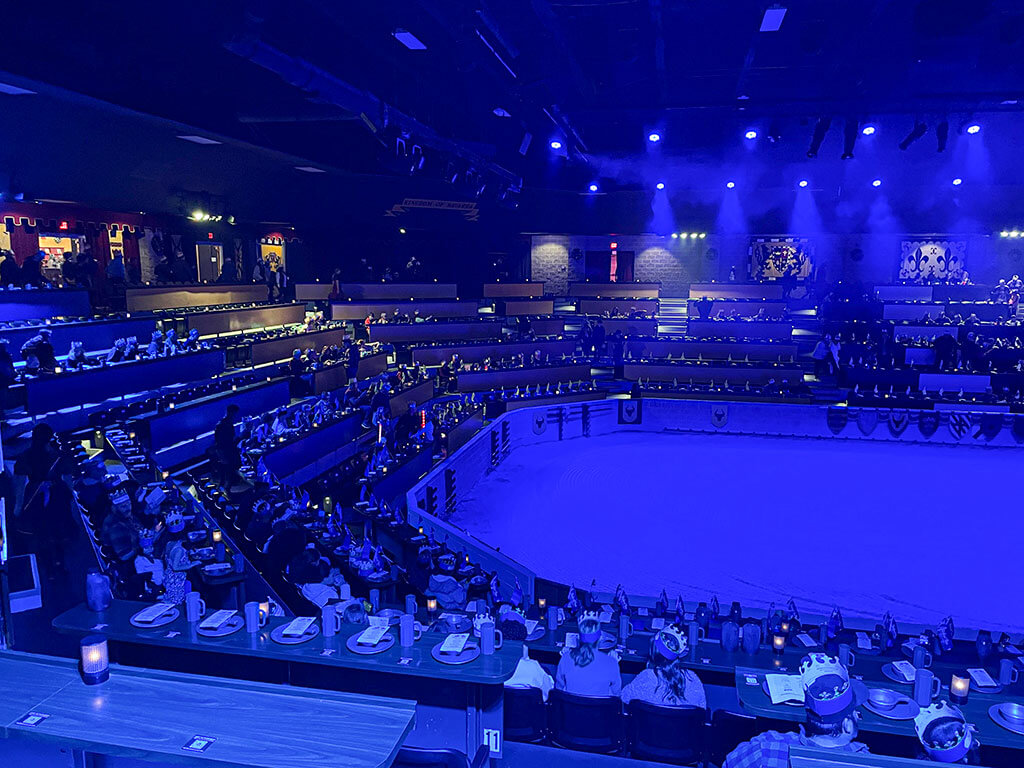 The tiered stadium seating ensured that everyone in the dimly-lit room had full view of the sandy jousting floor. 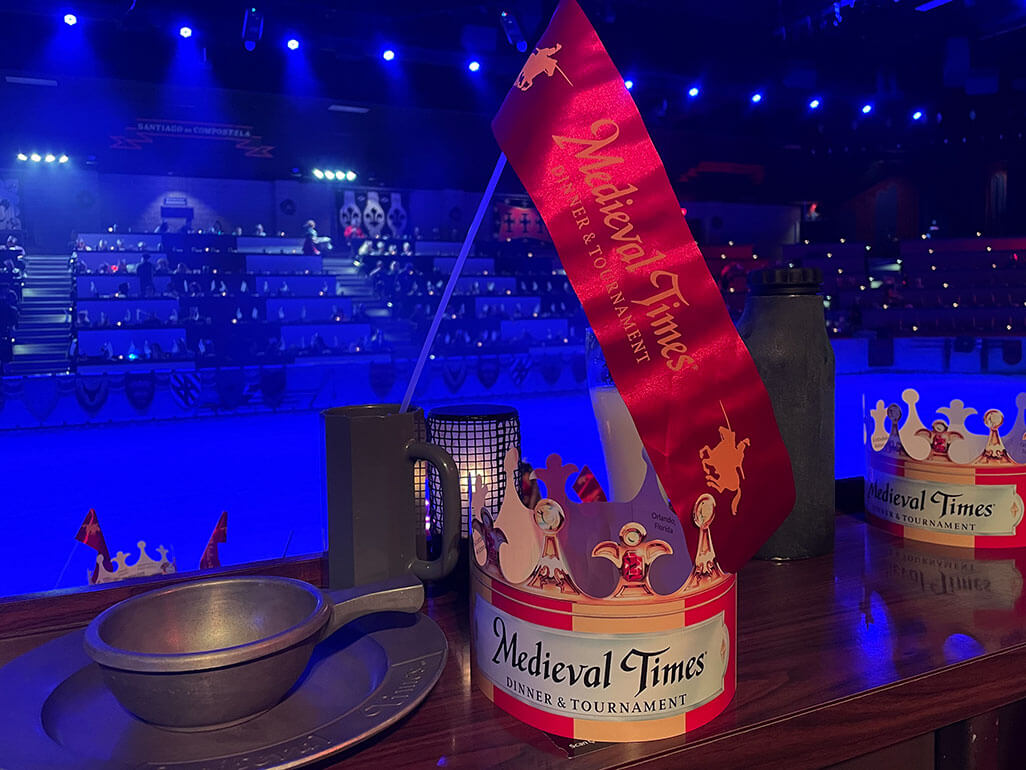 Have you noticed yet? Utensils didn't exist back in medieval times, so our meal was exclusively eaten with our hands. I bet that's not how your family normally eats Thanksgiving dinner. 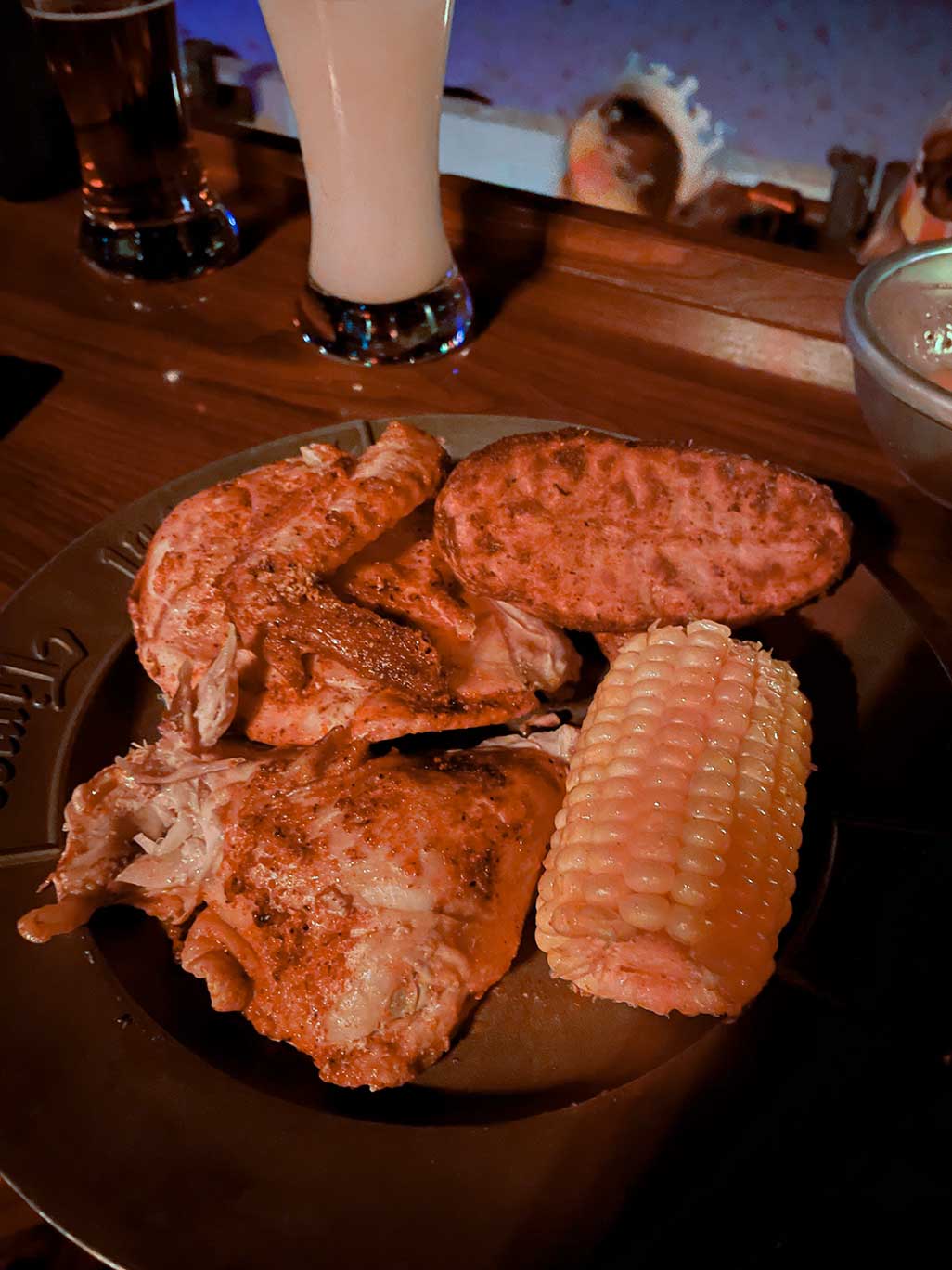 Next, they loaded our metal plates with the rest of the dragon — its seasoned flesh (half of a rotisserie chicken), its domed scales (half of a baked potato), and its bumpy tail (corn on the cob). After eating so much dragon, we sat back to watch the show, full and happy.

Toward the end of the performance, we received our desserts (not pictured here because we ate them too fast) — a chocolate eclair and a slice of rich yellow cake with chocolate frosting, followed by a complimentary moist towelette, just like in olden times. 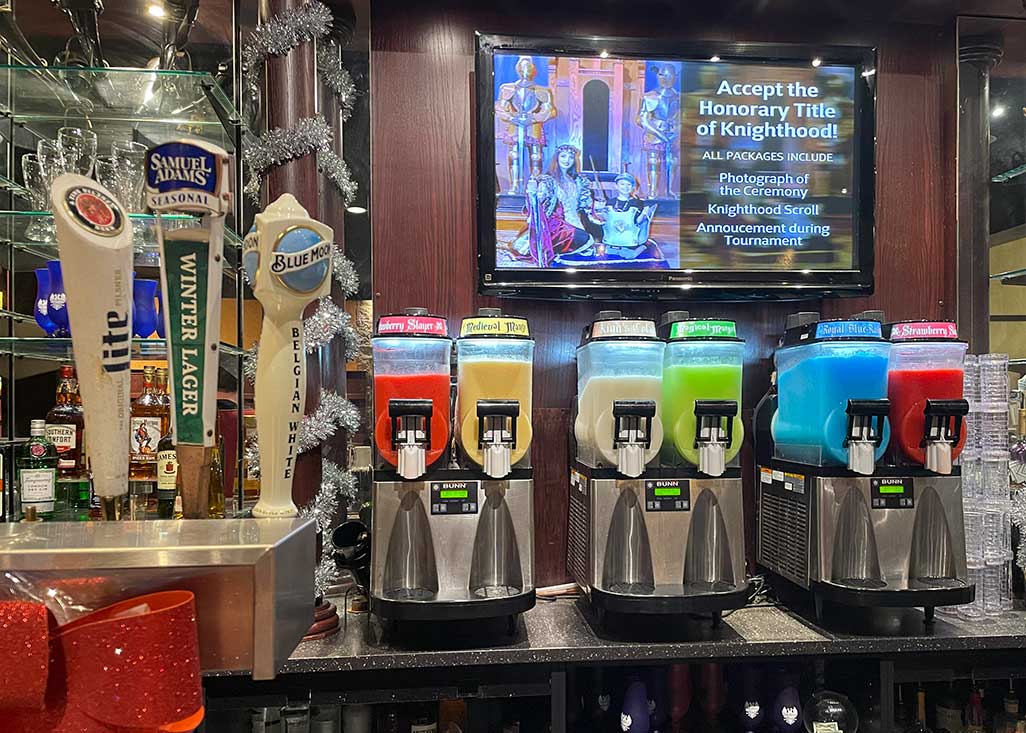 To accent our meal, we ordered a frozen piña colada slushie and an Octoberfest beer, both delicious. 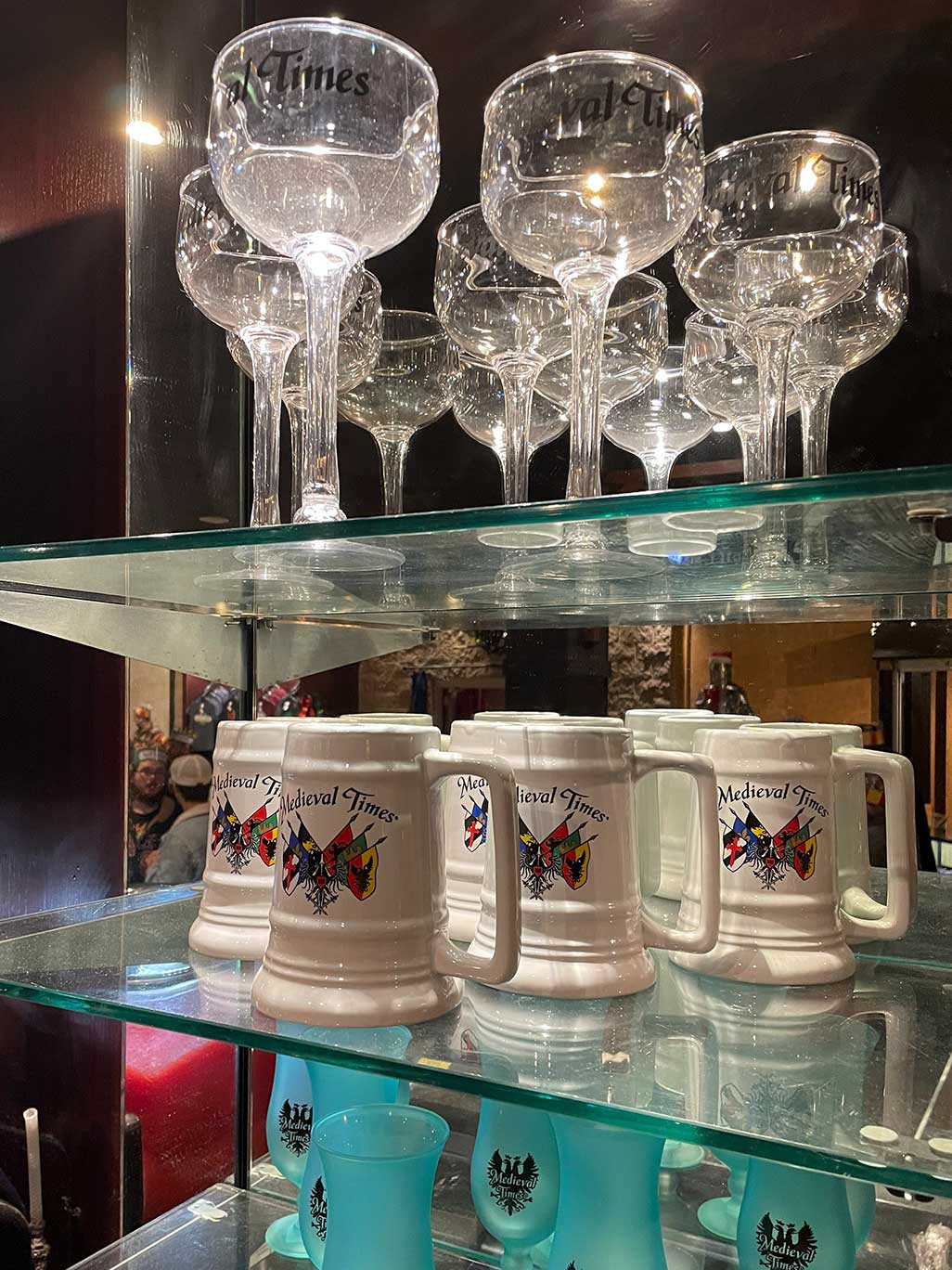 All drink purchases required a novelty glass to hold them. Ok, fair, but when were we ever going to use a bright blue Medieval Times daquiri glass or heavy beer stein again? 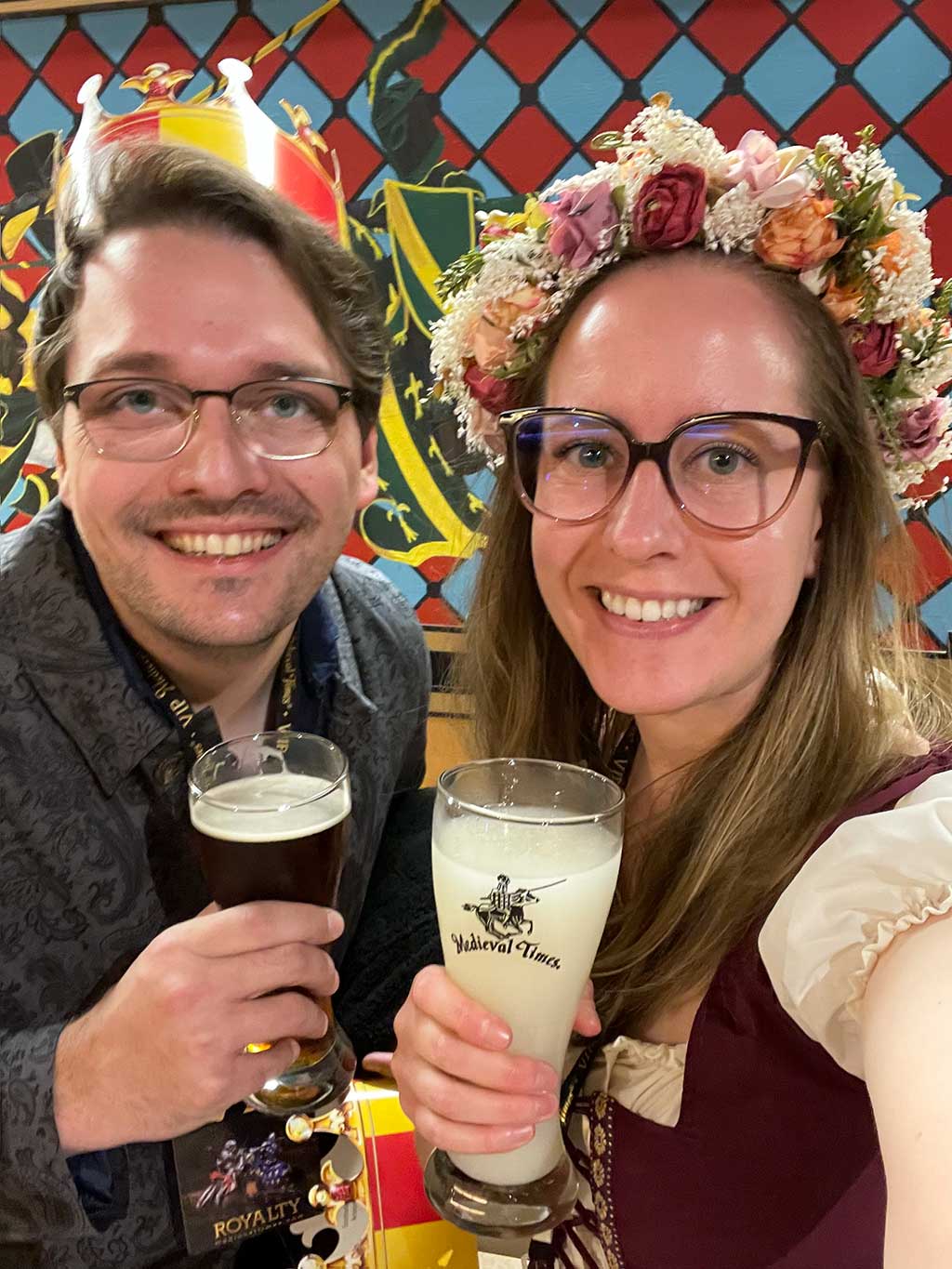 We liked these lager glasses much better and have used them several times since! Now, they remind us of the amazing time we had on this very different Thanksgiving.

Soon, Queen Doña Isabella took her place on the elevated throne above the arena entrance, and began introducing the evening's challengers. She told us to cheer loudest for our hero, the Red and Yellow Knight, and hiss vehemently for our villain on the opposing wall, the Black and White Knight. Boo! Boo! 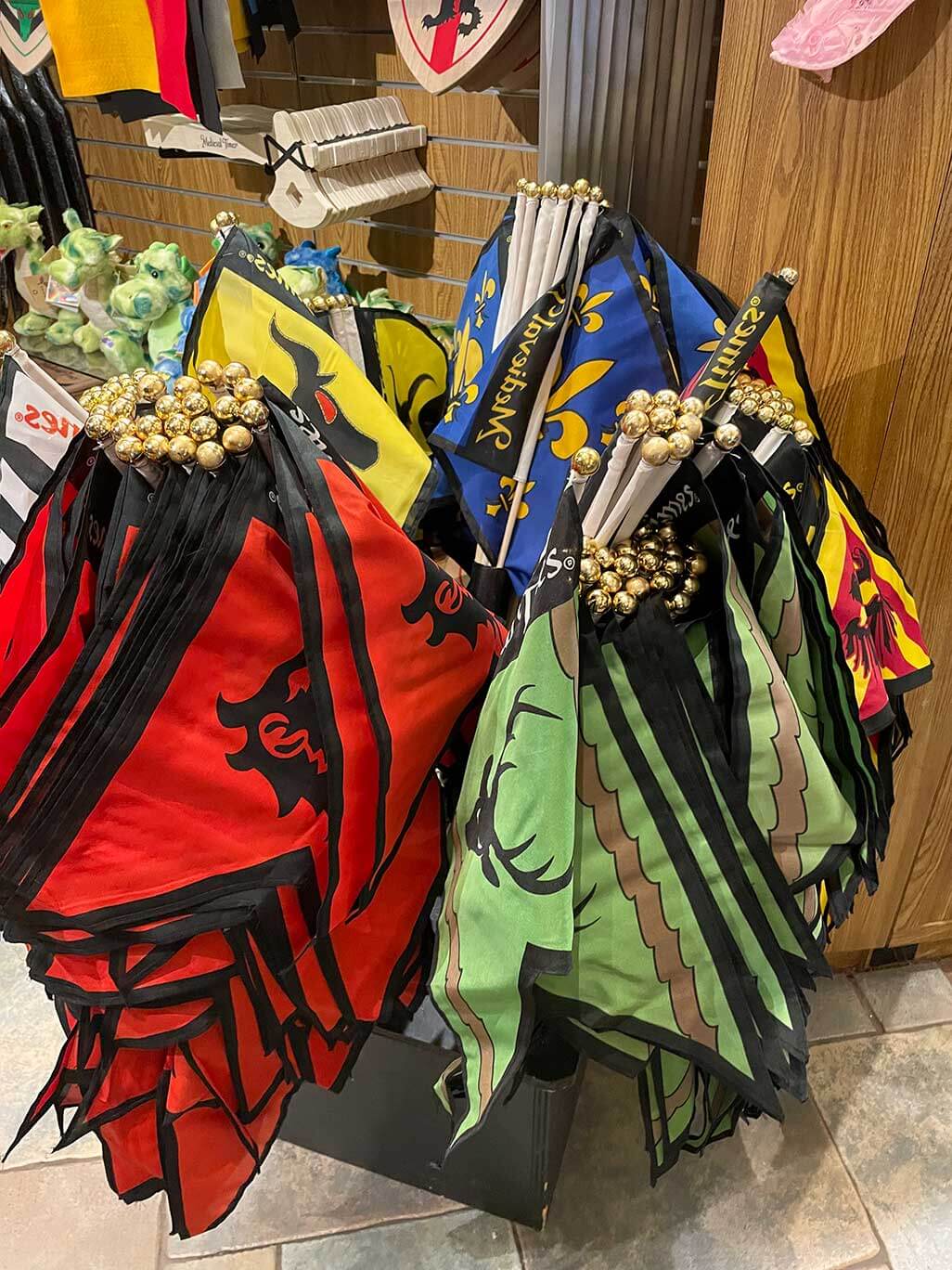 Back in the foyer, merchants sold these colorful flags for the crowd to show loyalty to their respective knights. 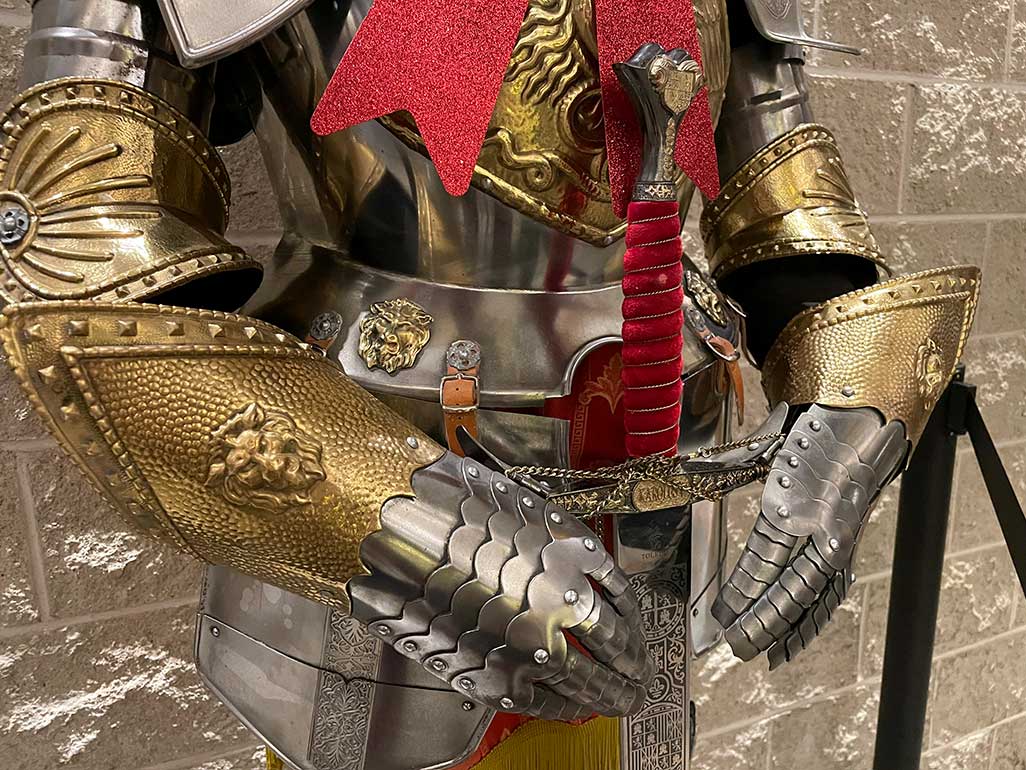 The tournament began with a series of skill challenges for the knights, like target spearing, ring spearing and flag catching. It was clear these mini competitions, all performed at full speed on horseback, were indicative of each rider's true talent and hours of practice. 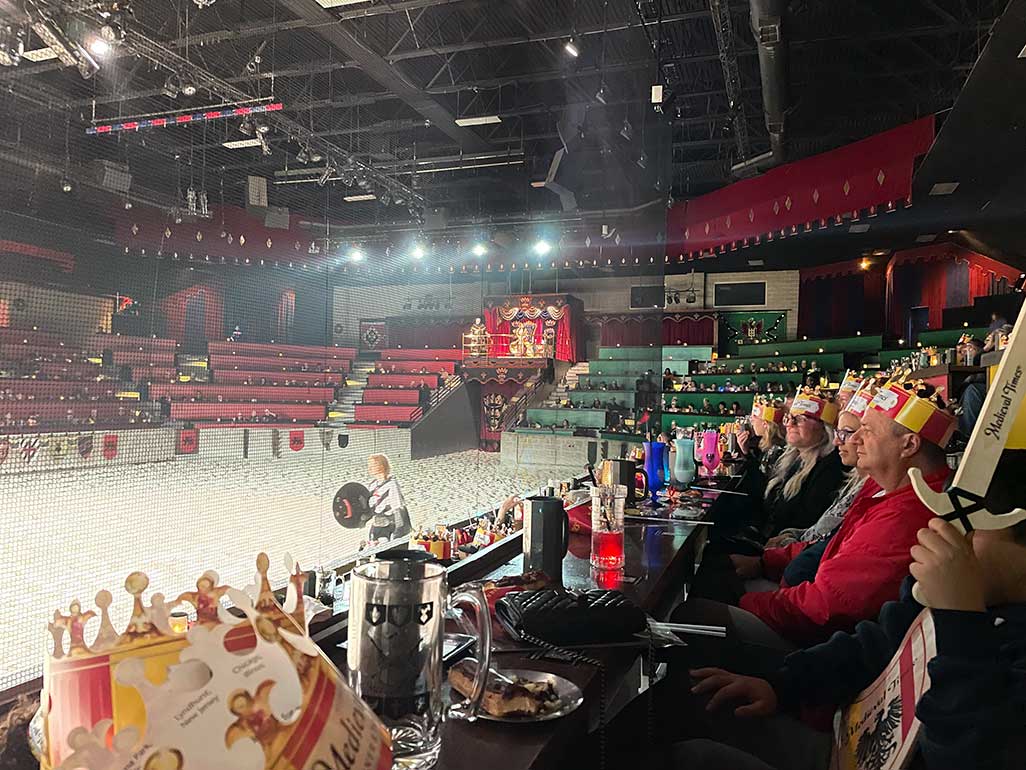 There are the Queen and the Lord Chancellor, bantering from their red velvet-shrouded perch. 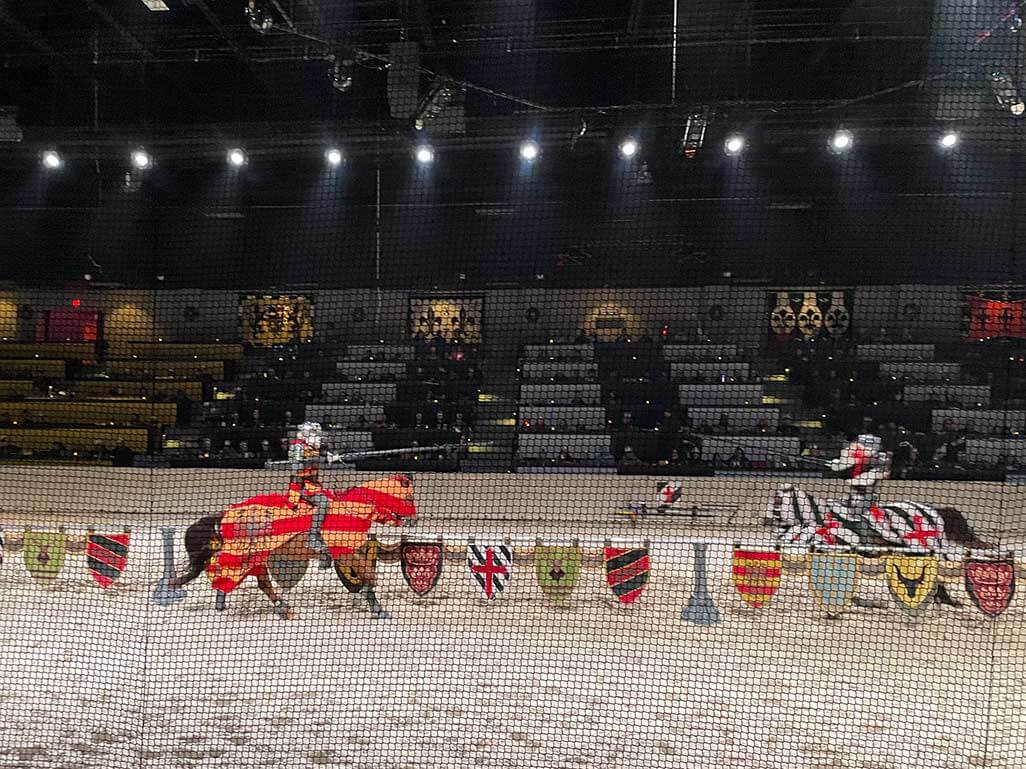 After announcing who won the skill challenge segment, the Queen asked the knights if they were ready to compete for the title of champion by jousting in center ring. They all agreed while a protective black netting was lowered to protect us from flying debris.

This is where the scripted part of the performance took over.

The knights took turns galloping at one another with sharp jousting lances, a splintering of wood exploding on their shields with each impact. 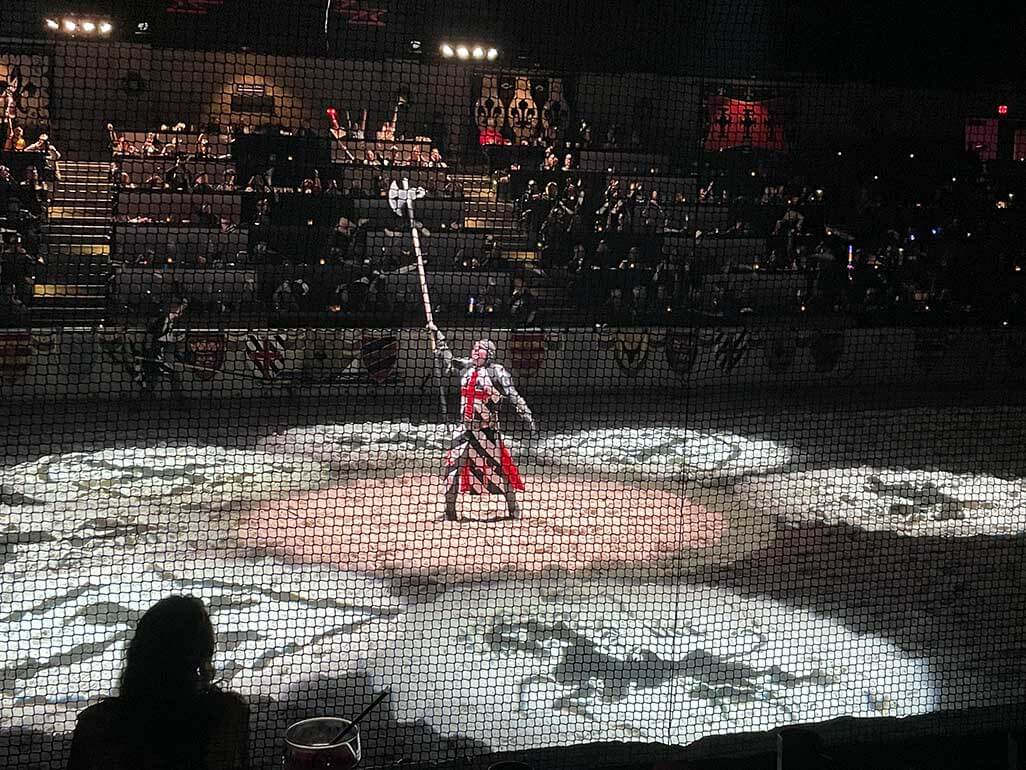 Some knights fell dramatically to the ground and were rewarded with a vicious battle from their opponent, their squires rushing to pass them a sword or axe or mace to defend themselves.

I don't know how they didn't get sand in their eyes, rolling around the arena in exaggerated hand-to-hand combat.

Finally, after all the match ups had concluded, the winning knight took center ring, bathed in the glow of his victory.

The Queen asked us if we wanted the losers to die for their shameful defeat, but we decided to let them live to fight again. 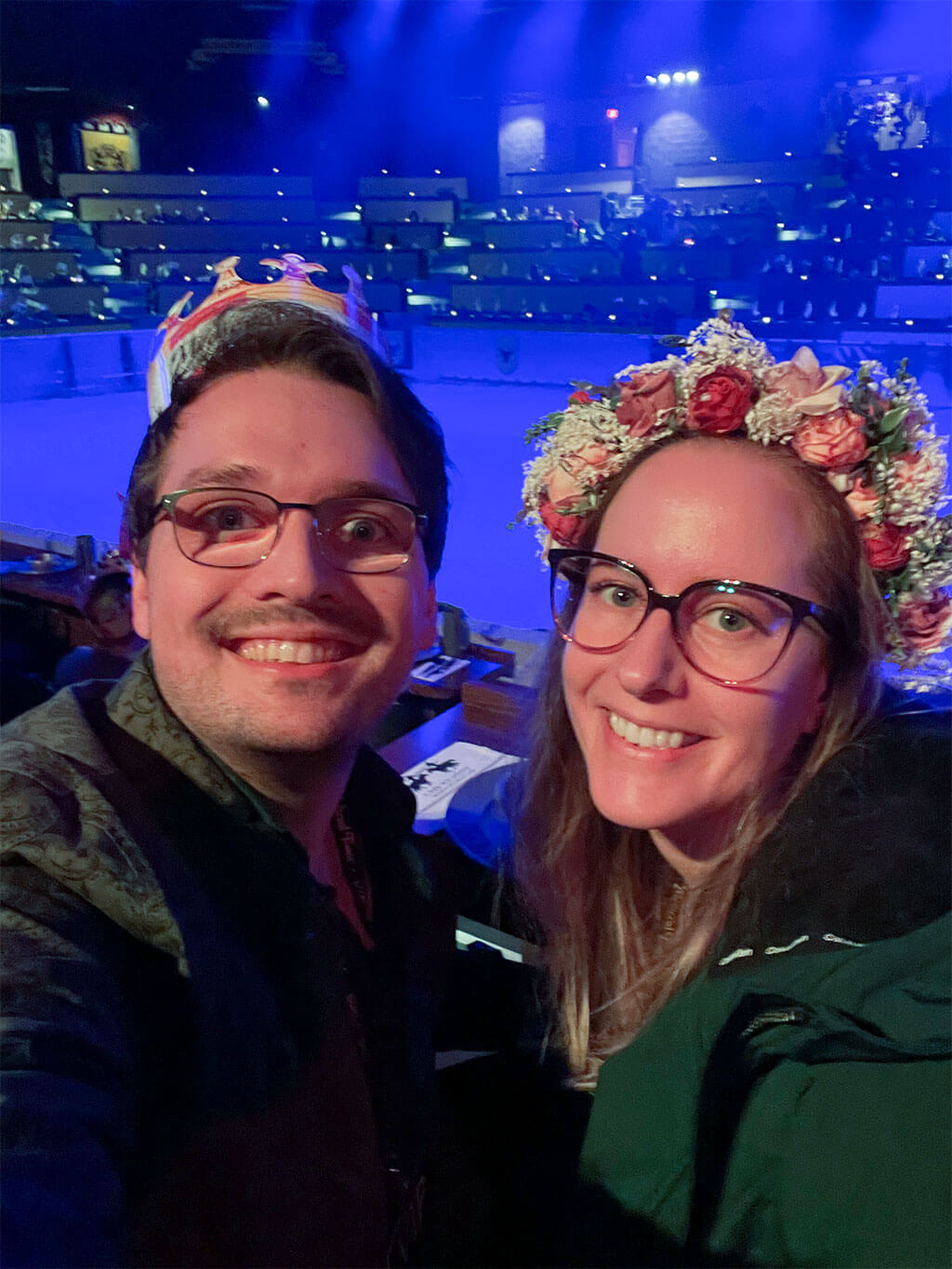 Our hero may not have won that night, but he fought nobly and had such long, flowing hair, we forgave him.

This is just a taste of the fascinating entertainment we enjoyed at Medieval Times. No time to detail the incredible showmanship displayed by the Master of Horses and his fleet of dancing steeds or the Royal Falconer and her trained falcon. 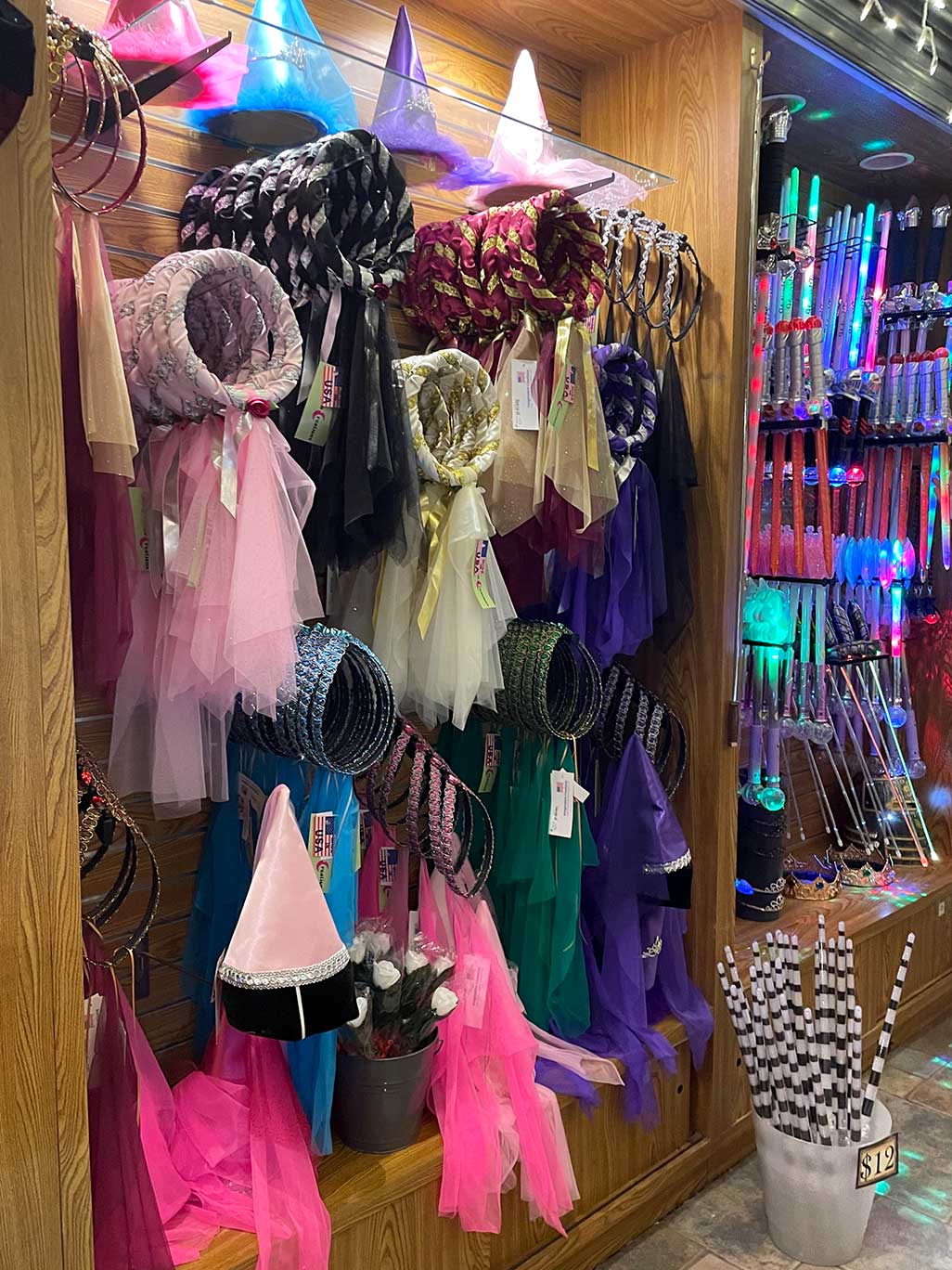 Guests were invited to start (or conclude) the evening with an array of medieval paraphernalia, like a commemorative headdress, light-up sword or real metal sword to take home and display. 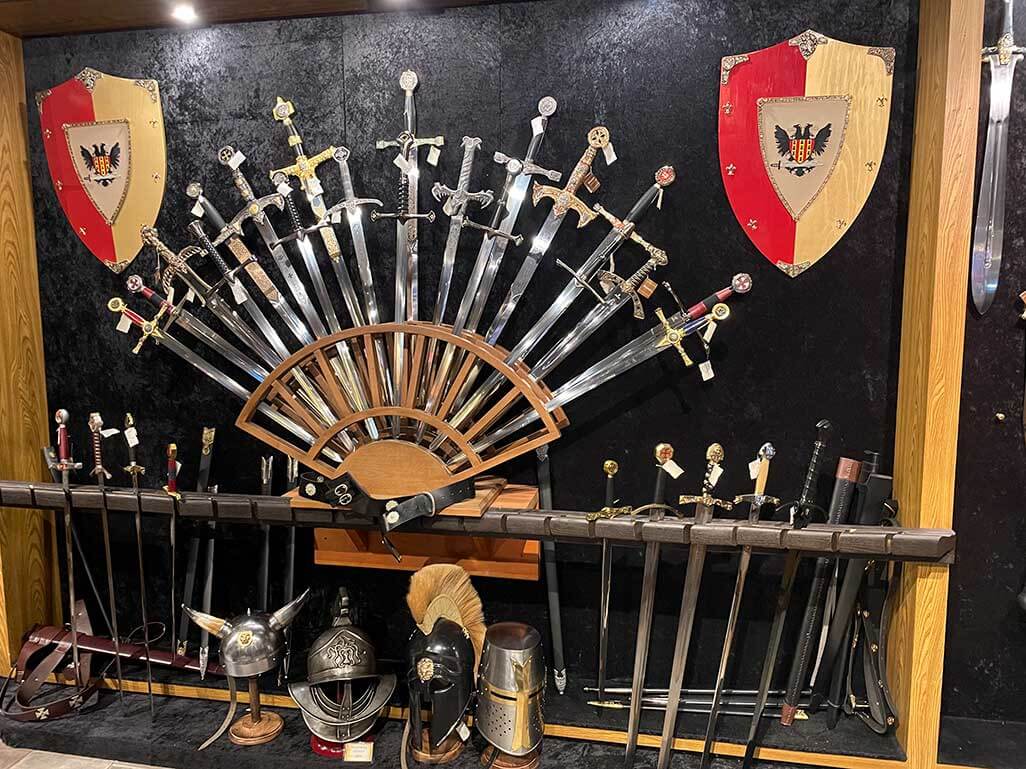 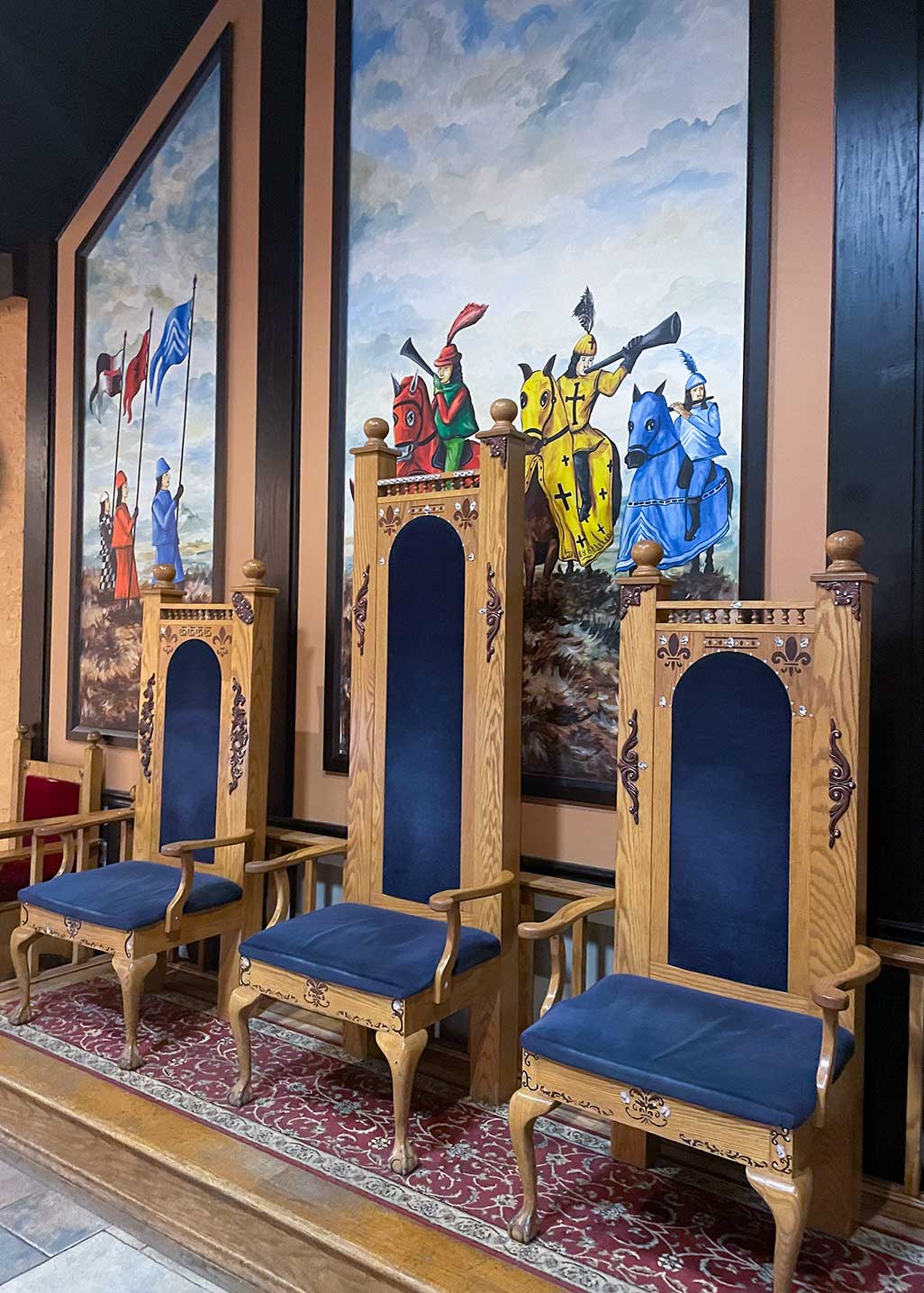 Before leaving, we daydreamed about what our lives would be like as royals...and determined that we liked our current lives just fine, though it was fun to dress up and time travel for one evening. 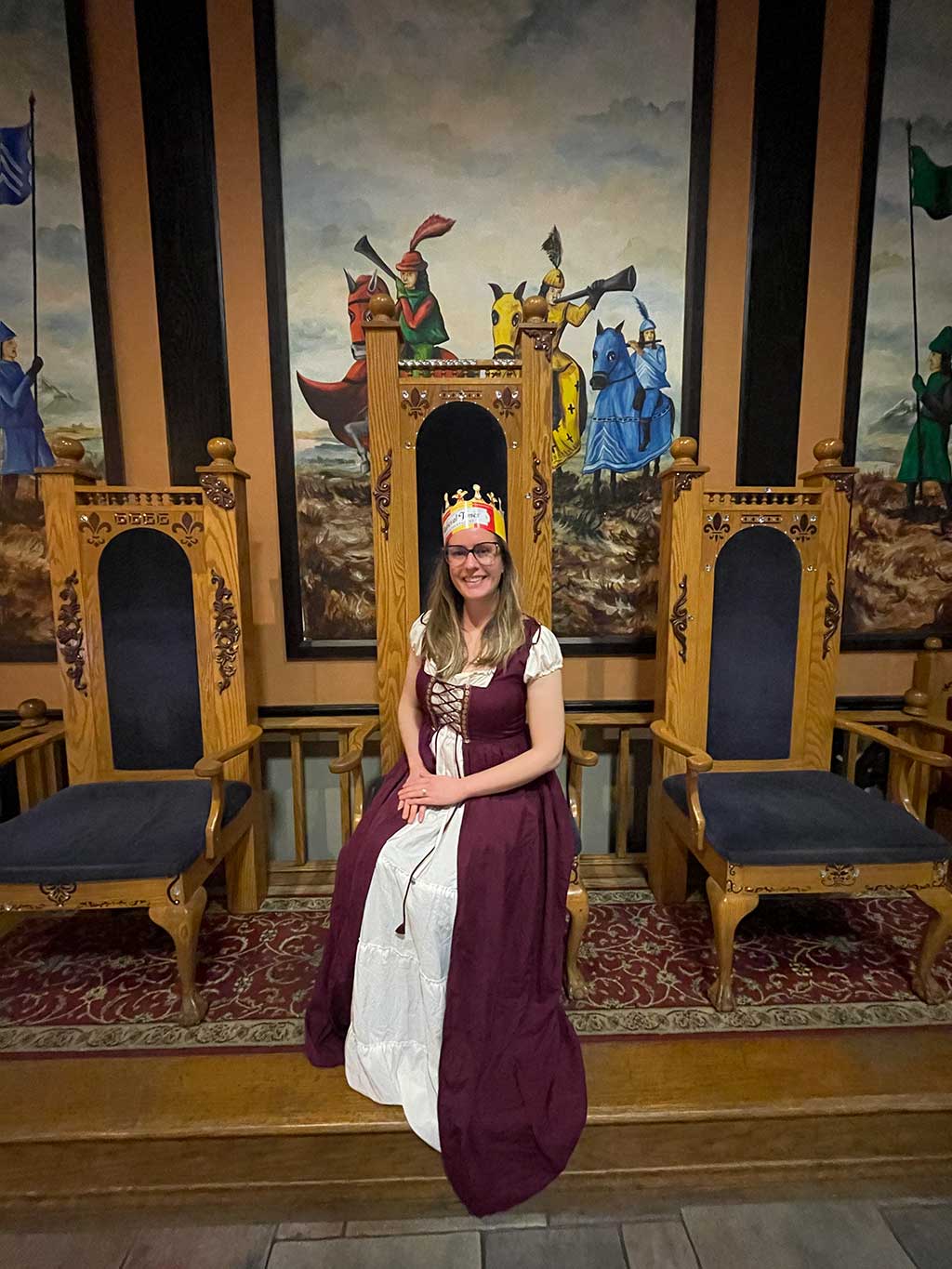 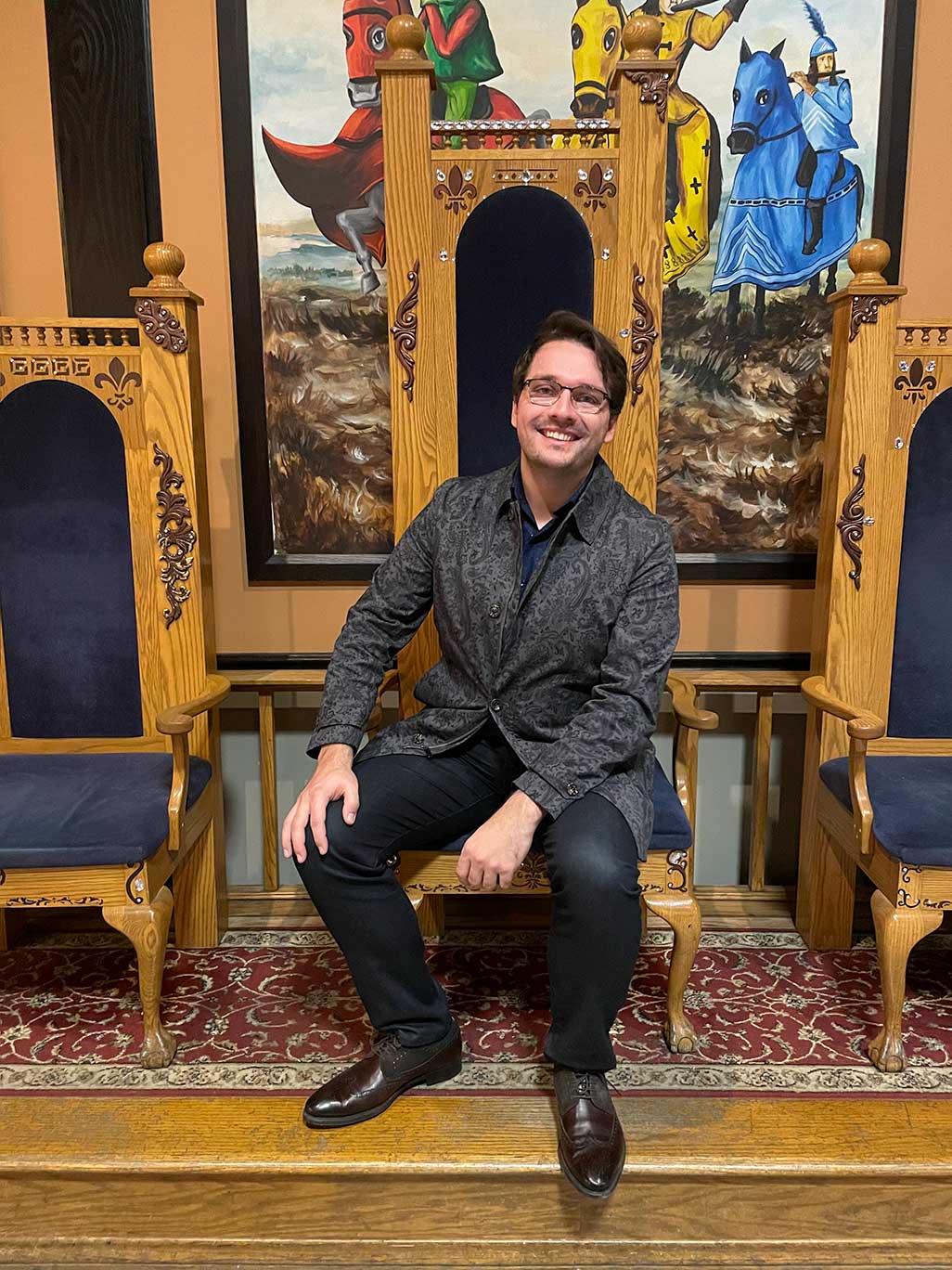 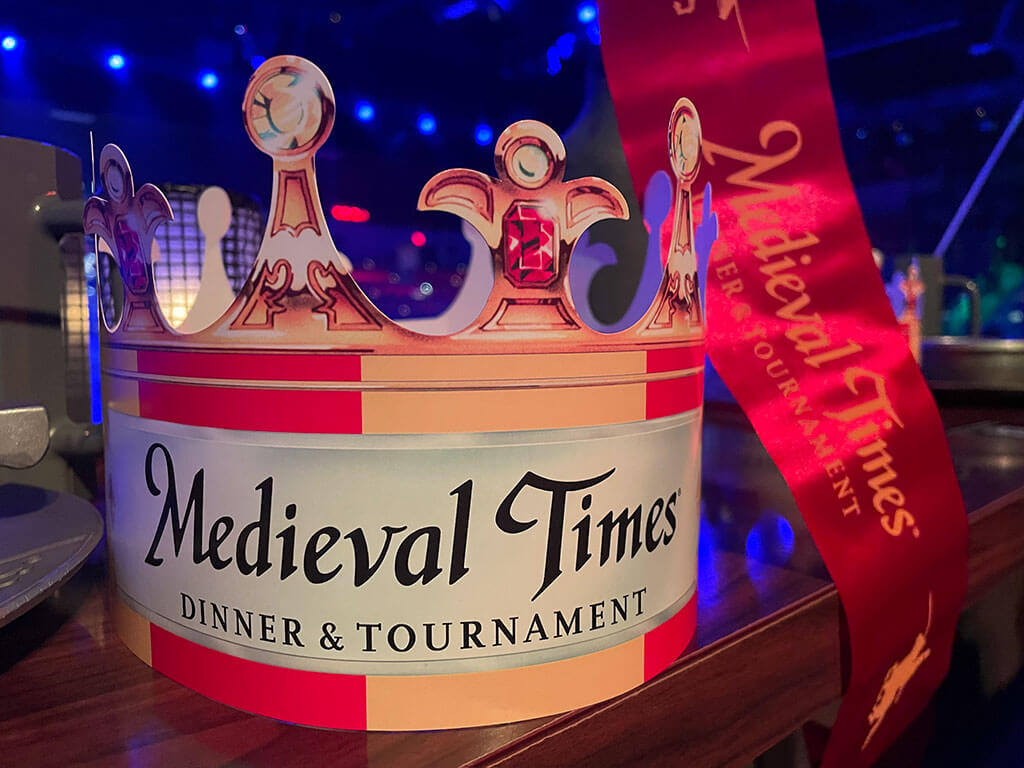 Wondering where else we've been in Chicagoland? Click here to find out: