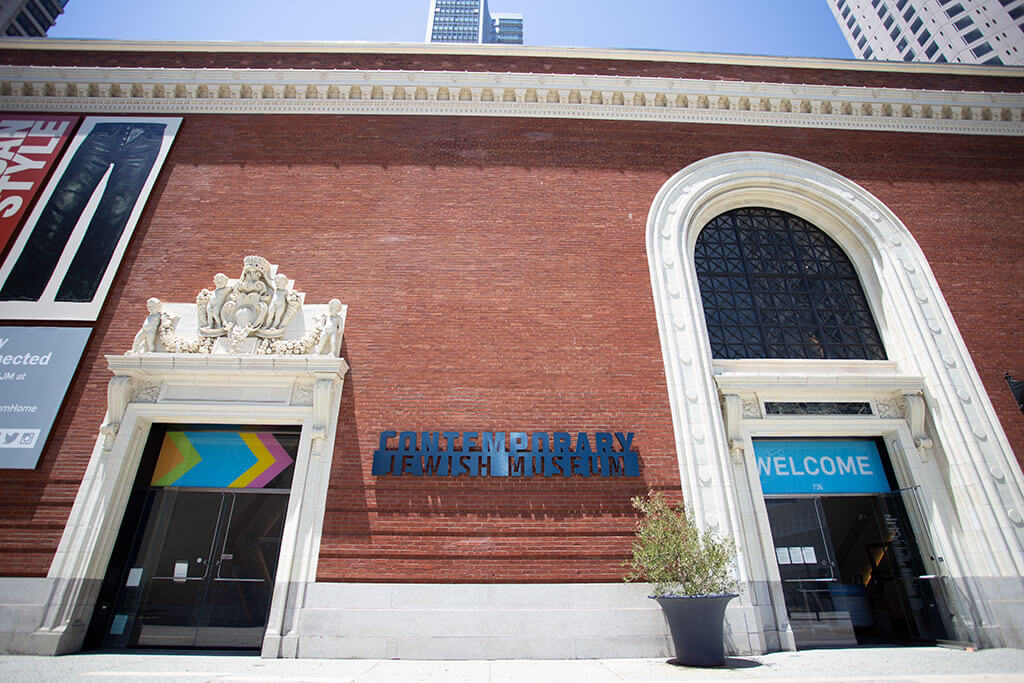 When I married my husband, I didn't realize how much his Jewish heritage would play a role in our life together. Brandon's mom is Ashkenazi Jewish on her mother's side, a fact the family learned late in their history. This discovery transformed the way the family thought about themselves, their traditions, and their relationship with the Jewish community. 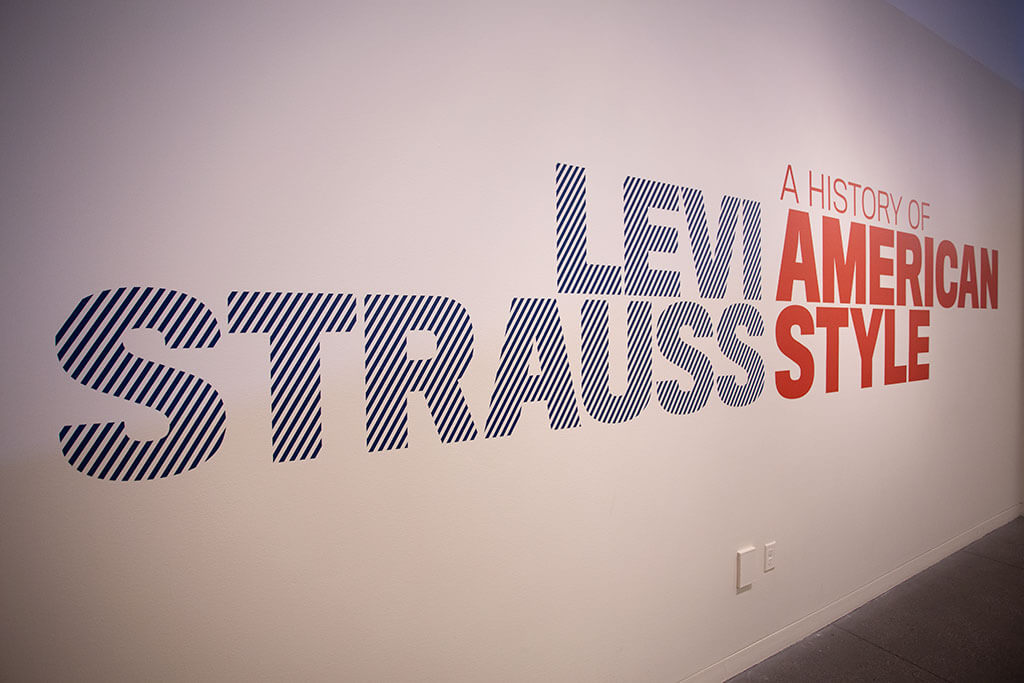 Visiting the Contemporary Jewish Museum in San Francisco was something we chose to do very intentionally, not a way to pass the time. We went to honor Brandon's cultural ancestry, and learn a thing or two about jeans.

The "Levi Strauss: A History of American Style" exhibit has two distinct sections: 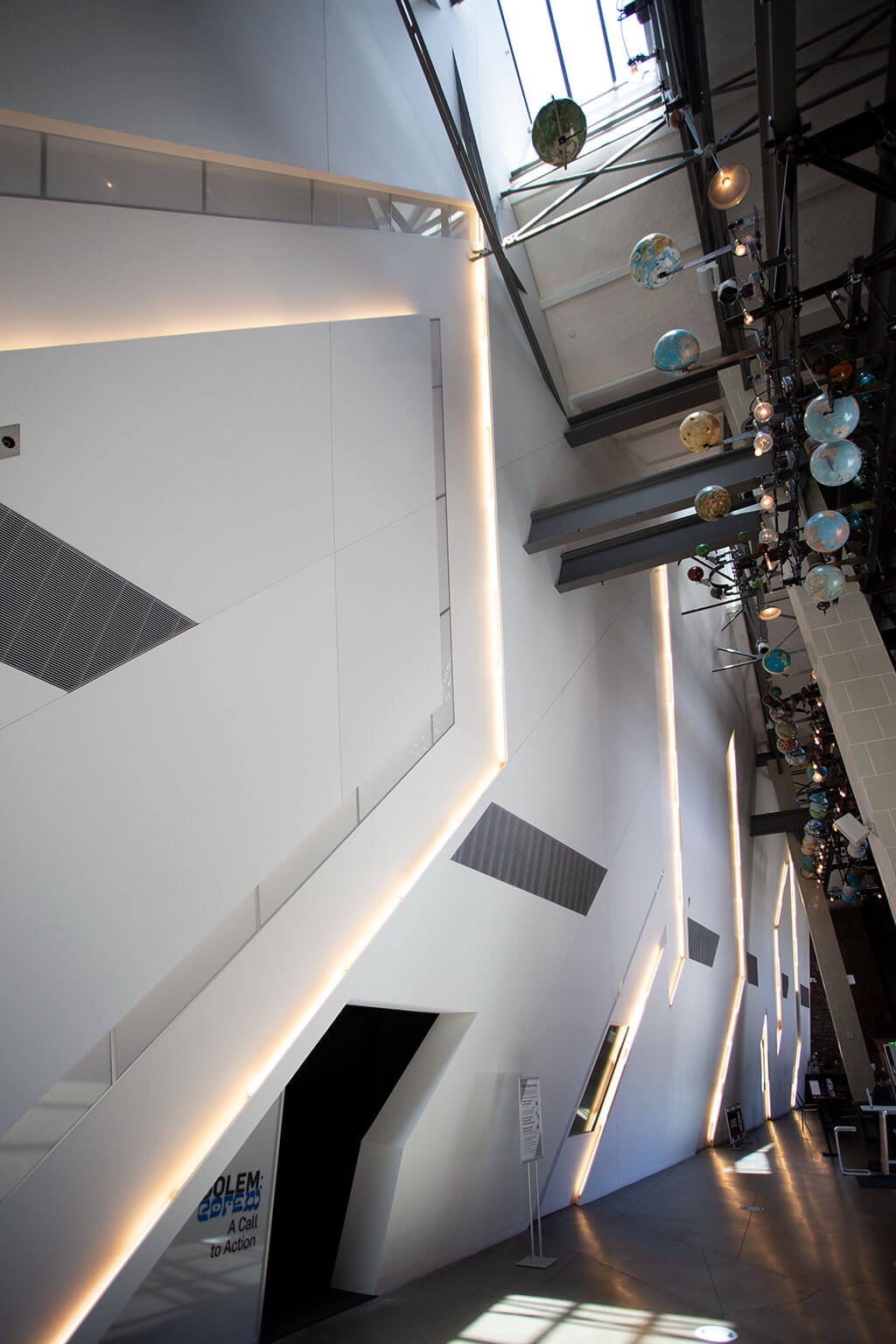 "In the Koret-Taube Grand Lobby of the Museum, visitors encounter the angled Pardes Wall, which spans nearly the full length of the original power substation [building].

This beautiful abstract spelling of the Hebrew word pardes—meaning 'garden (or orchard) beyond'—is embedded into the main wall and accented with lights. In Jewish tradition, pardes has come to infer a 'garden of meanings.'

The symbolic significance in the idea of pardes is reflected in the Museum's goals to create an environment for exploring multiple perspectives, encouraging open-mindedness, and for acknowledging diverse backgrounds." - thecjm.org 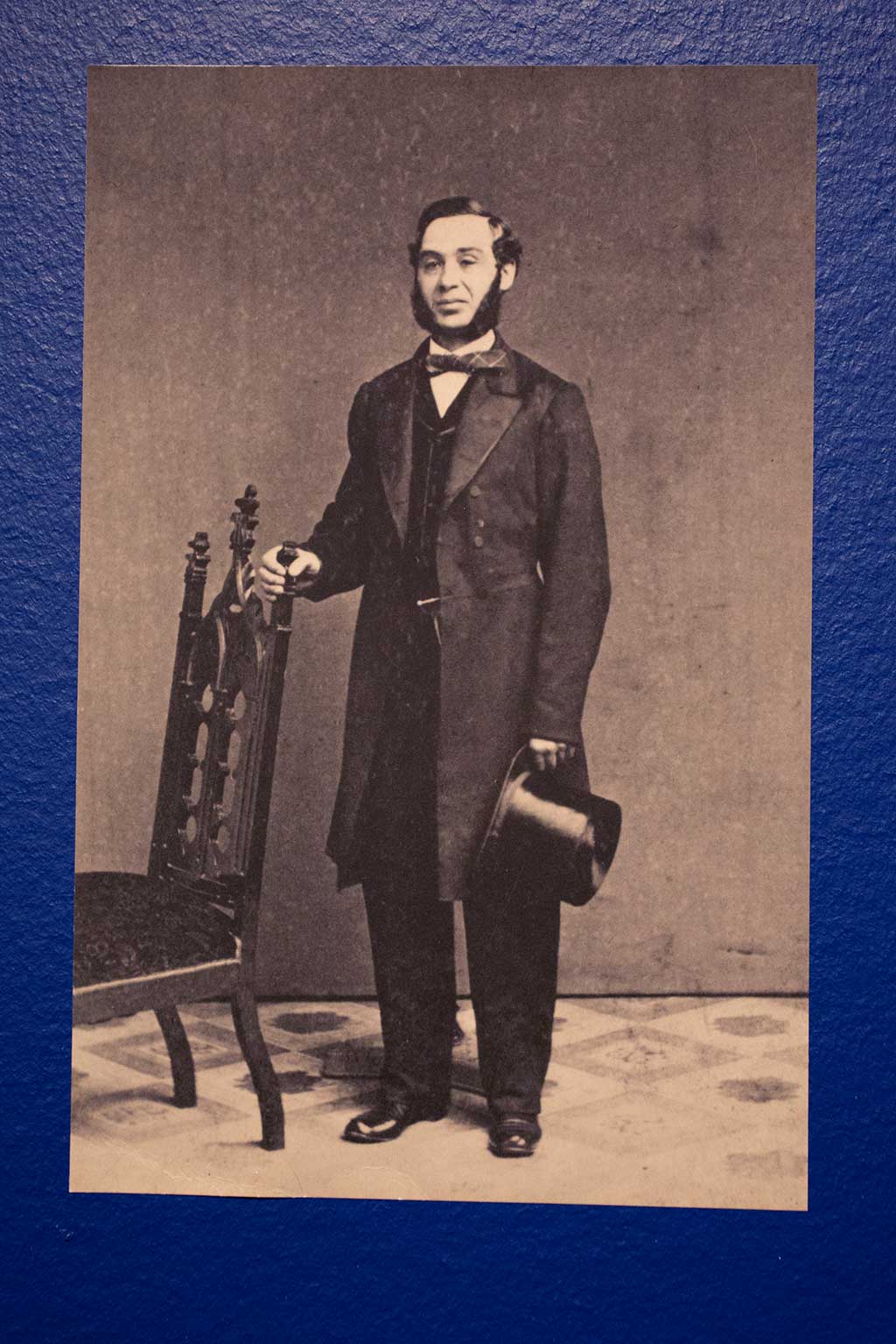 Let me introduce you to the young Jewish man who started it all, Levi Strauss, circa 1860. Levi started his career working for his brother as a dry goods salesman in New York and eventually moved to San Francisco during the Gold Rush days.

His good friend Jacob W. Davis, the inventor of riveted denim pants, convinced Strauss to use the tiny metal pieces in his humble jeans-making business, and the rest is history. 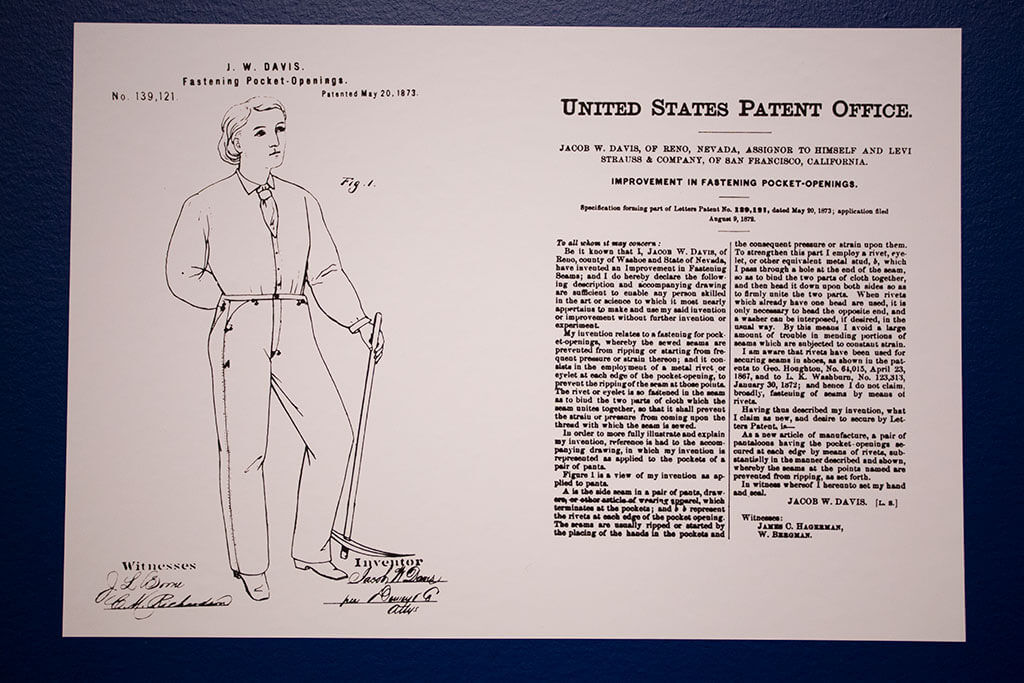 "My invention relates to a fastening for pocket-openings, whereby the sewed seams are prevented from ripping or starting from frequent pressure or strain thereon; and it consists in the employment of a metal rivet or eyelet at each edge of the pocket-opening, to prevent the ripping of the seam at those points." 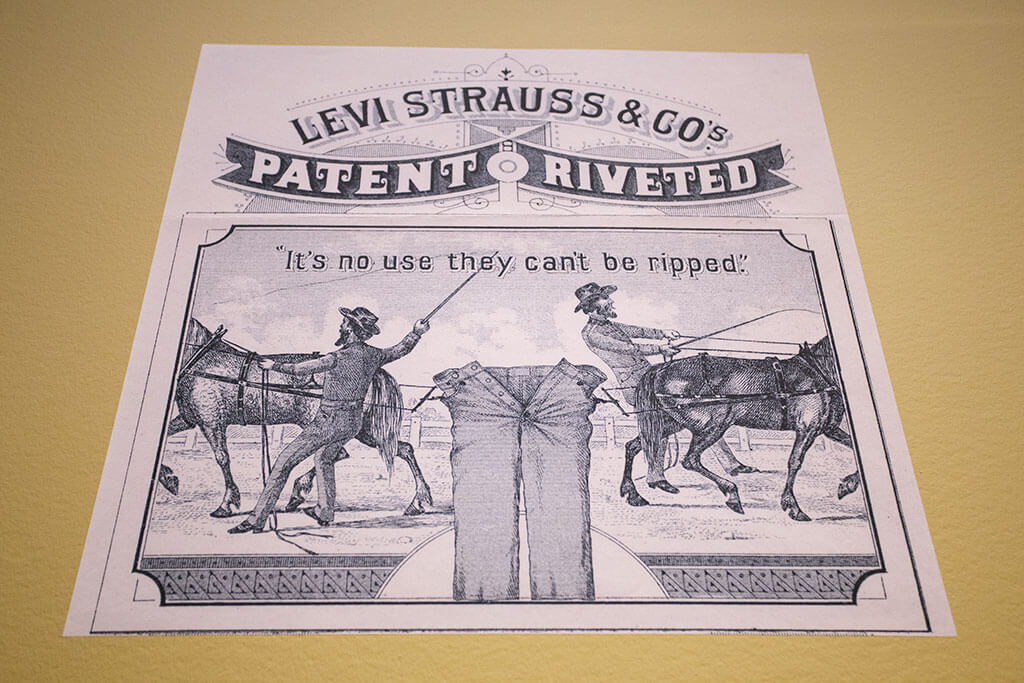 You'll notice the Levi's logo that appears on today's modern jeans (below) closely matches the original logo from the late 1800s.

Levi's has won the trust of jean-wearers worldwide with the durability of their signature denim, strengthened by their patented rivets which securely fasten the pockets and zipper areas. 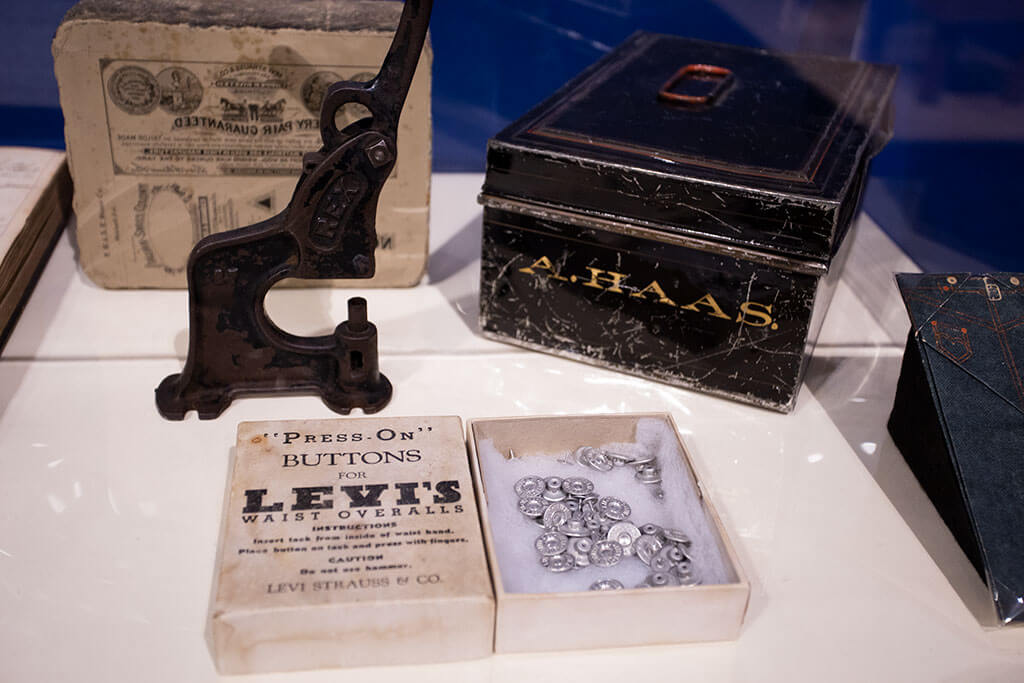 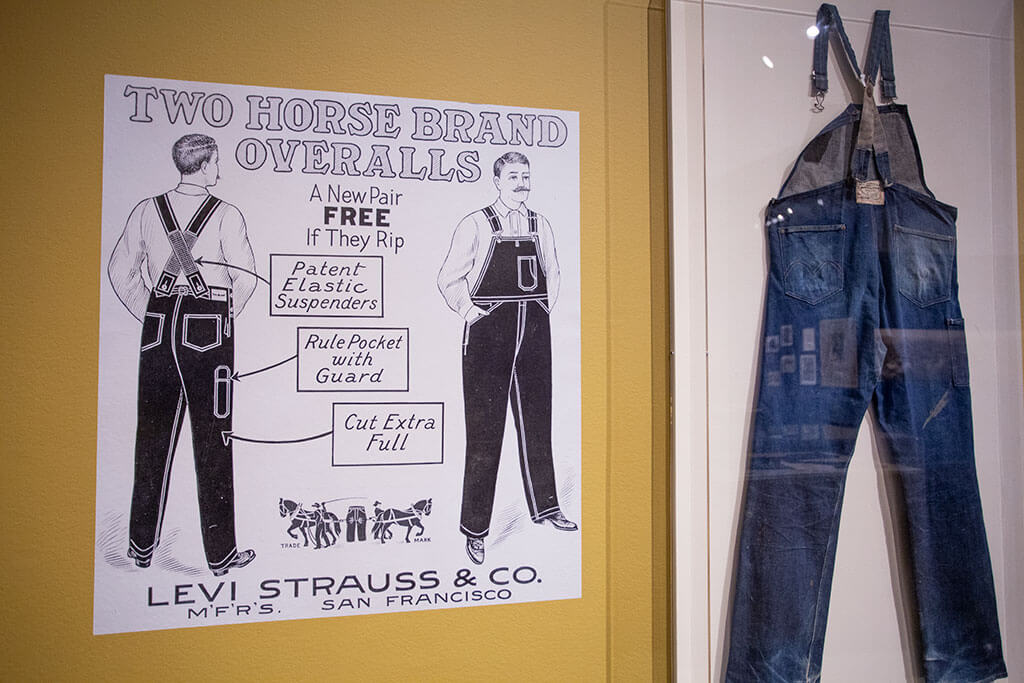 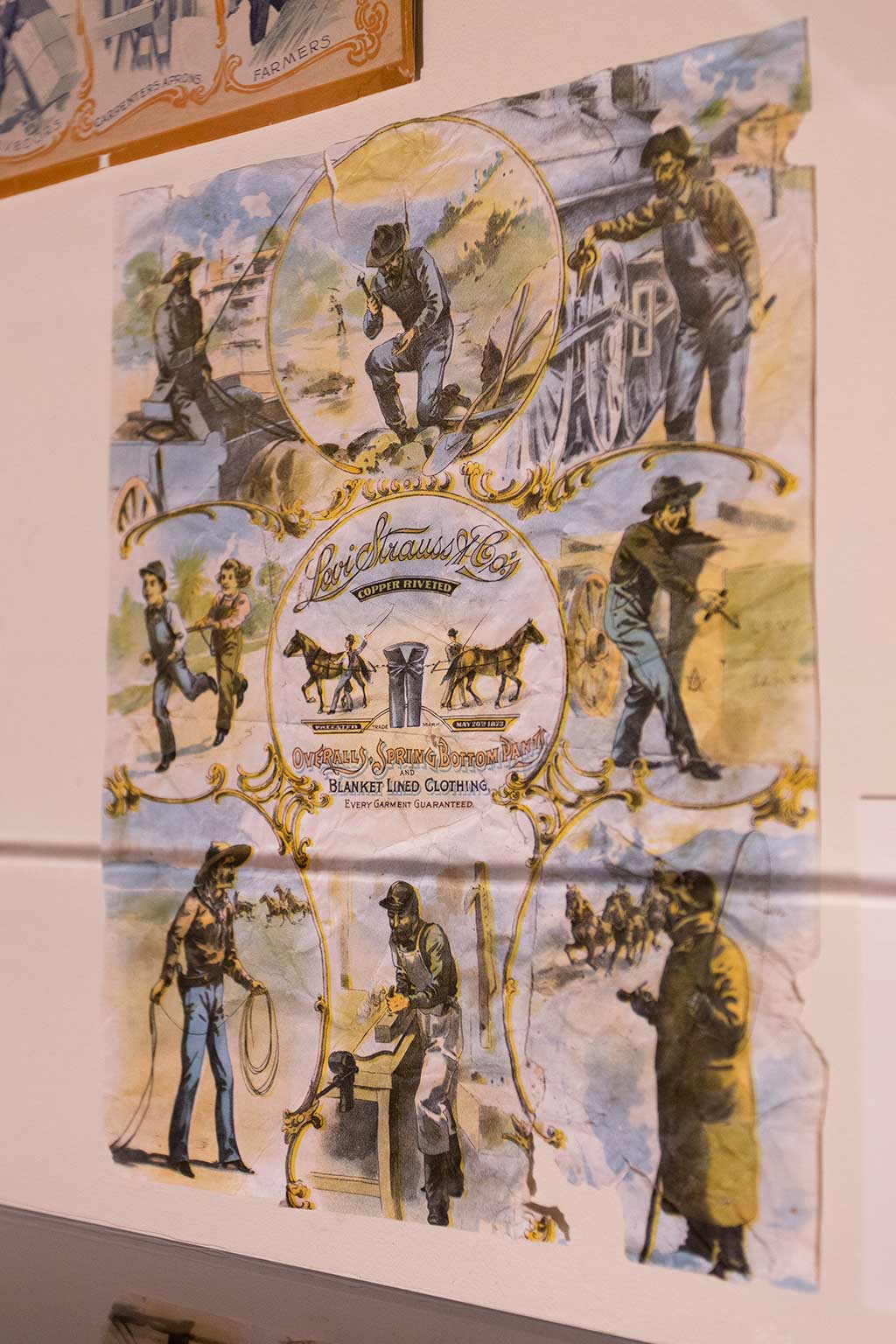 This advertisement illustrates the many phases and uses of Levi's jeans by the common man, like stagecoach driver, prospector in the California Gold Rush, locomotive engineer, arctic explorer, carpenter, and cowboy. 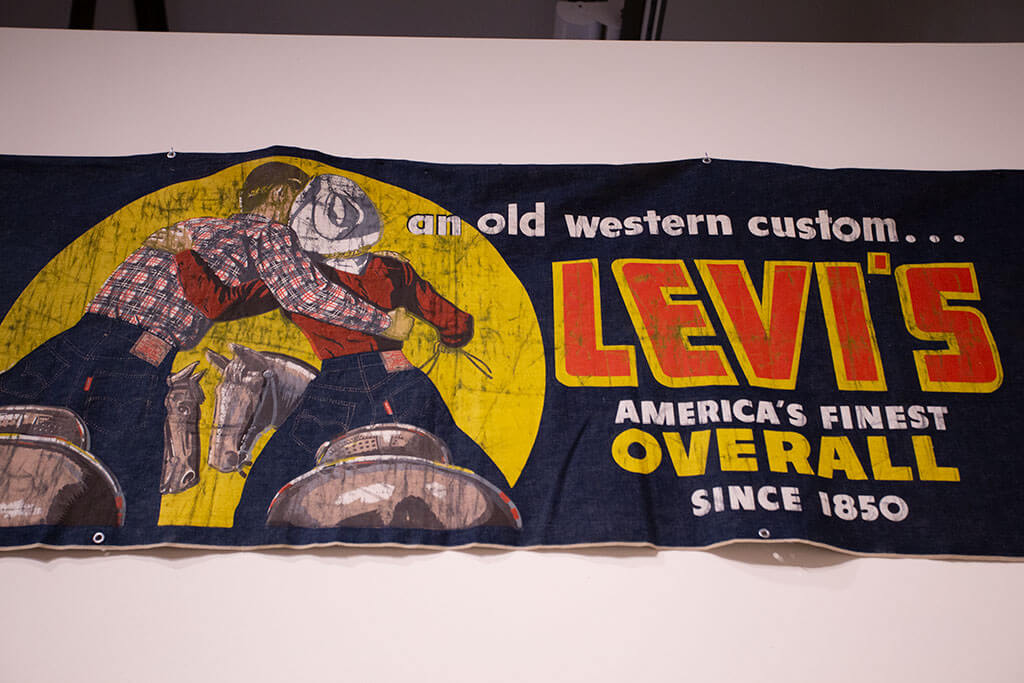 Levi's jeans have a strong connection to the American cowboy folklore and the working man, portrayed in countless vintage advertisements like these. 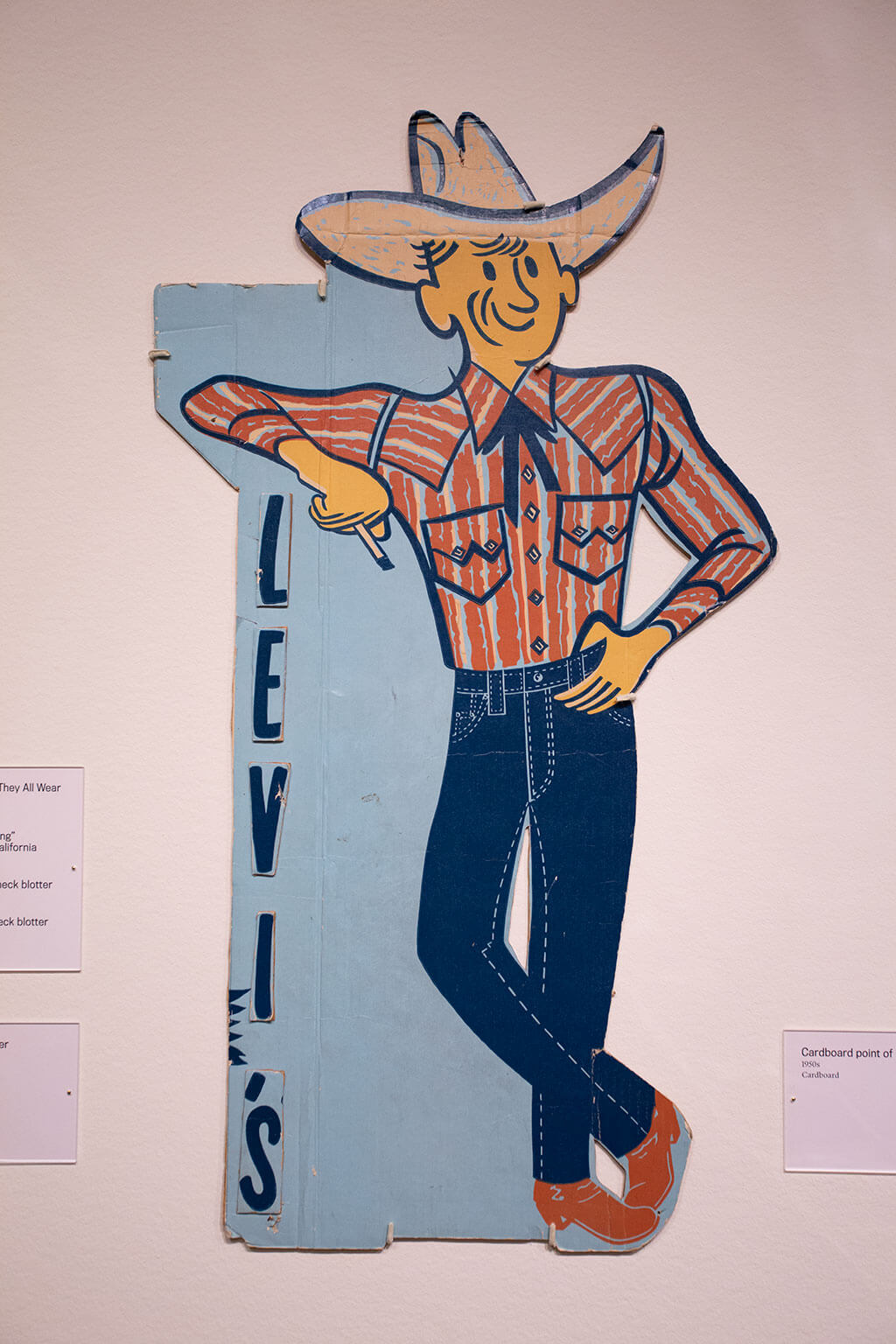 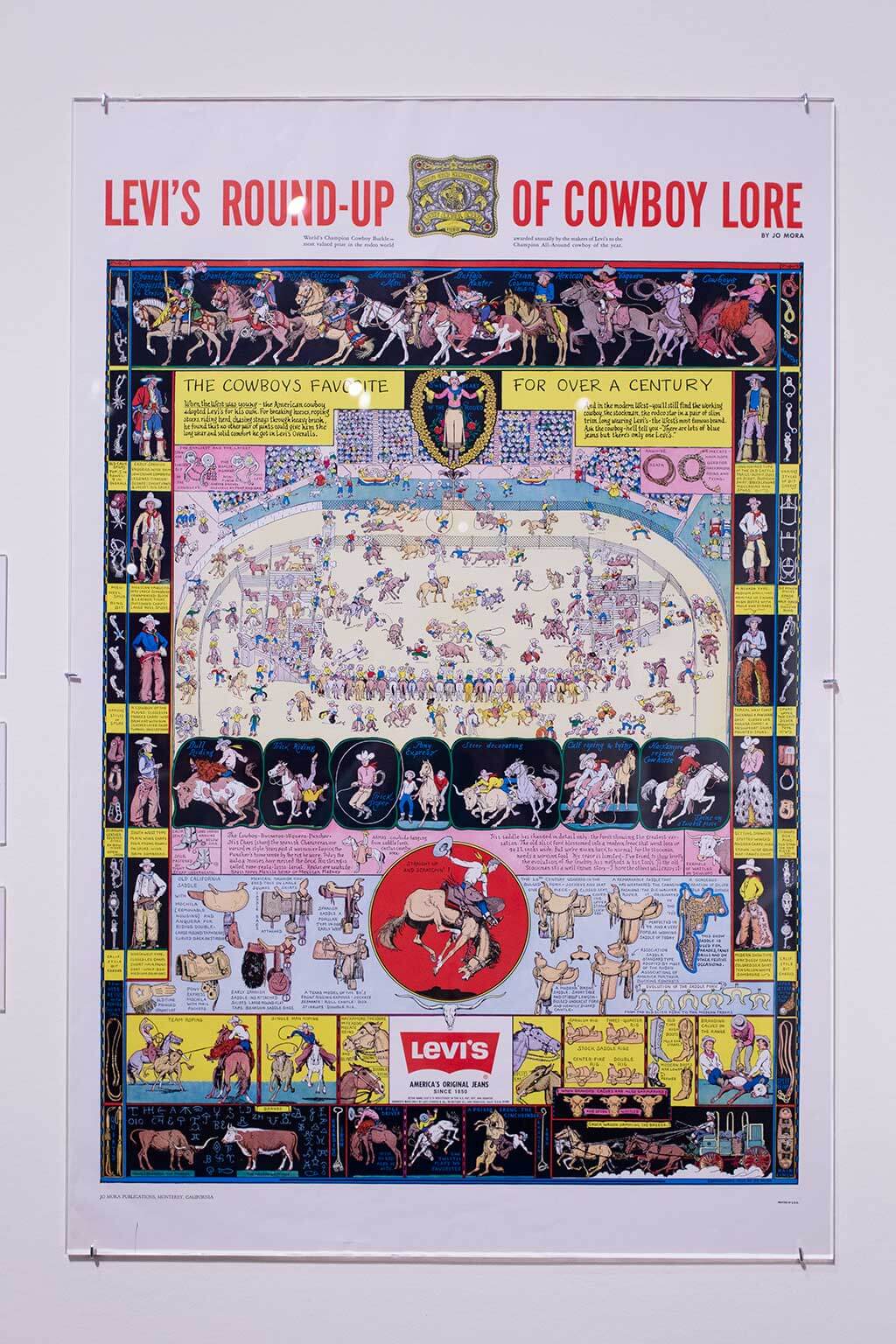 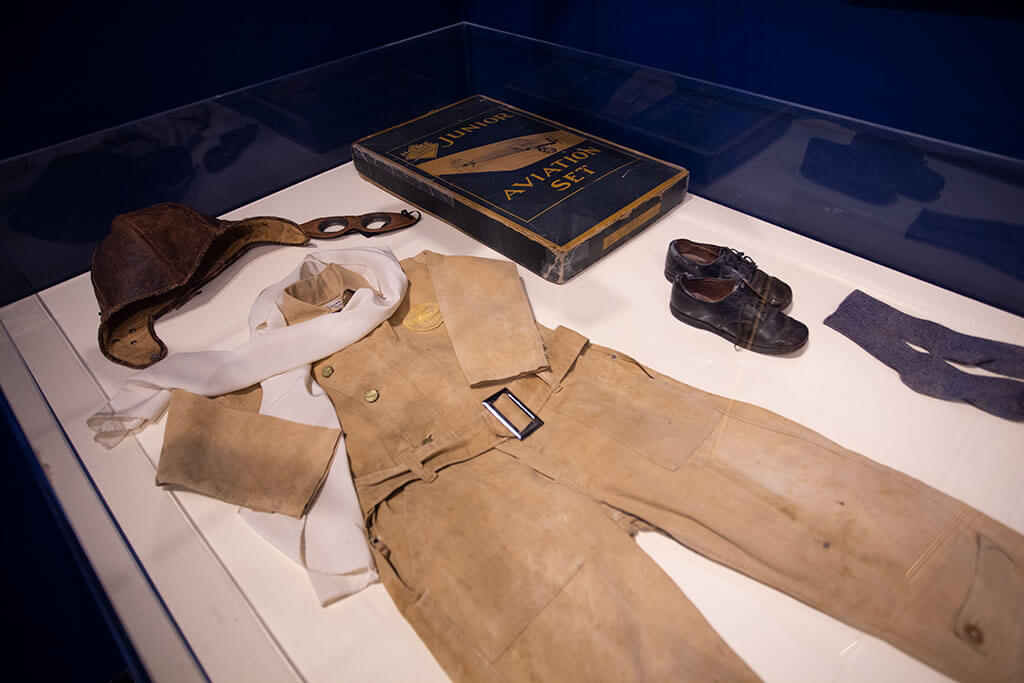 Not all jeans are blue, like this tan children's aviation jumpsuit costume. 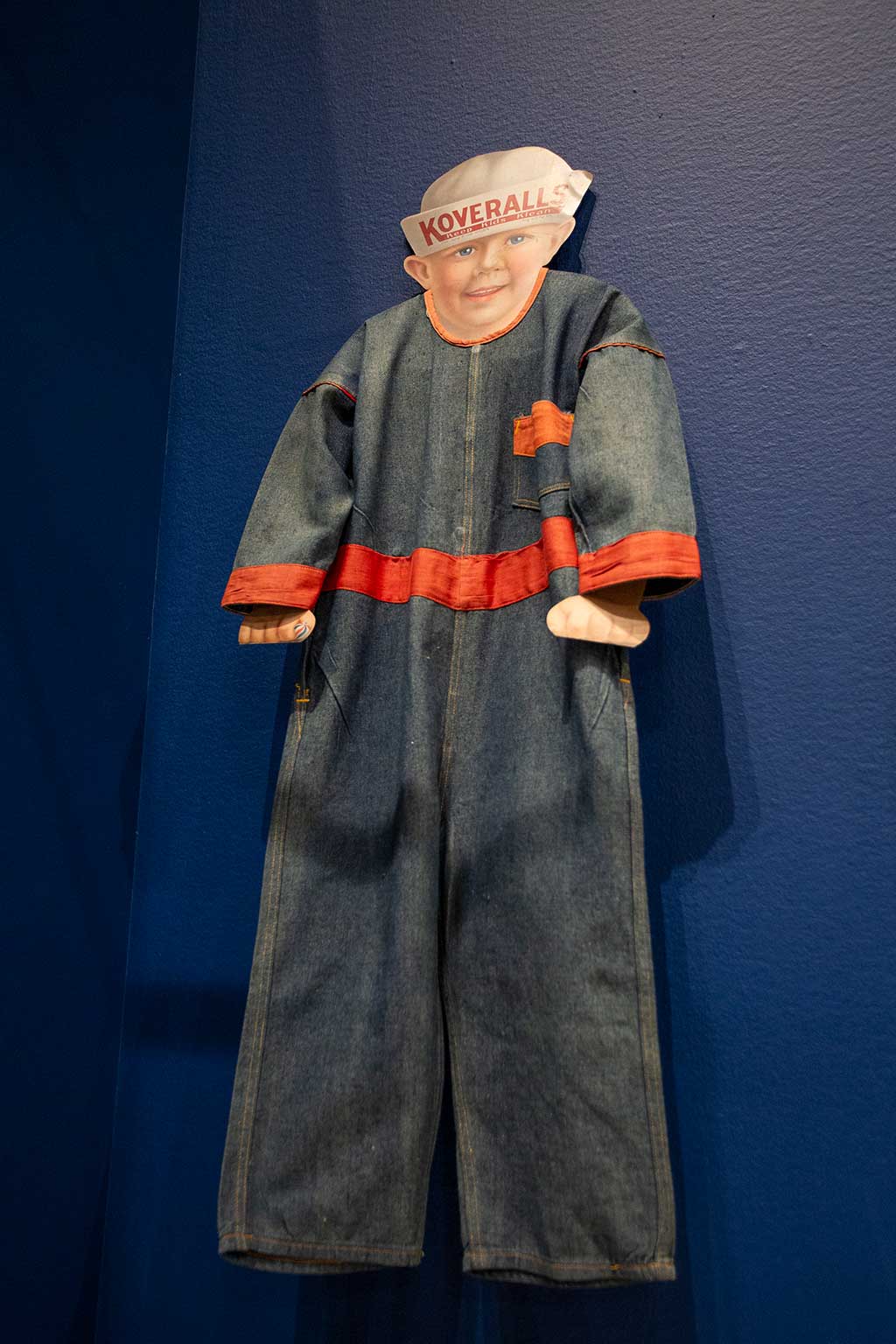 "Koveralls Keep Kids Klean. The jolly togs for kiddies - ages 1 to 8 years. The garment protects your child. The guarantee protects you. A new suit FREE if they rip." 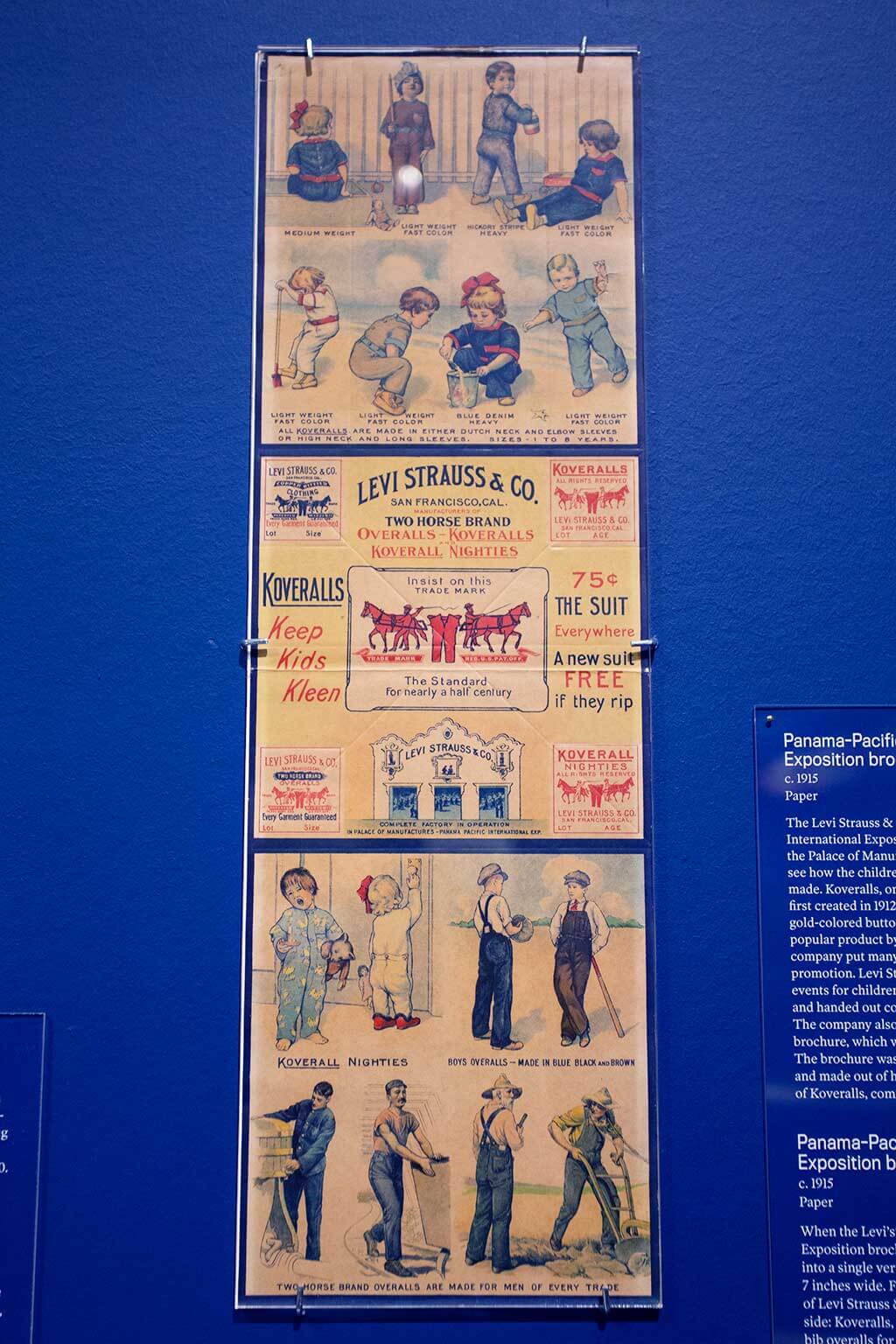 "Koveralls, one-piece denim playsuits, were first created in 1912, with bright red accents and gold-colored buttons on the drop seat. " 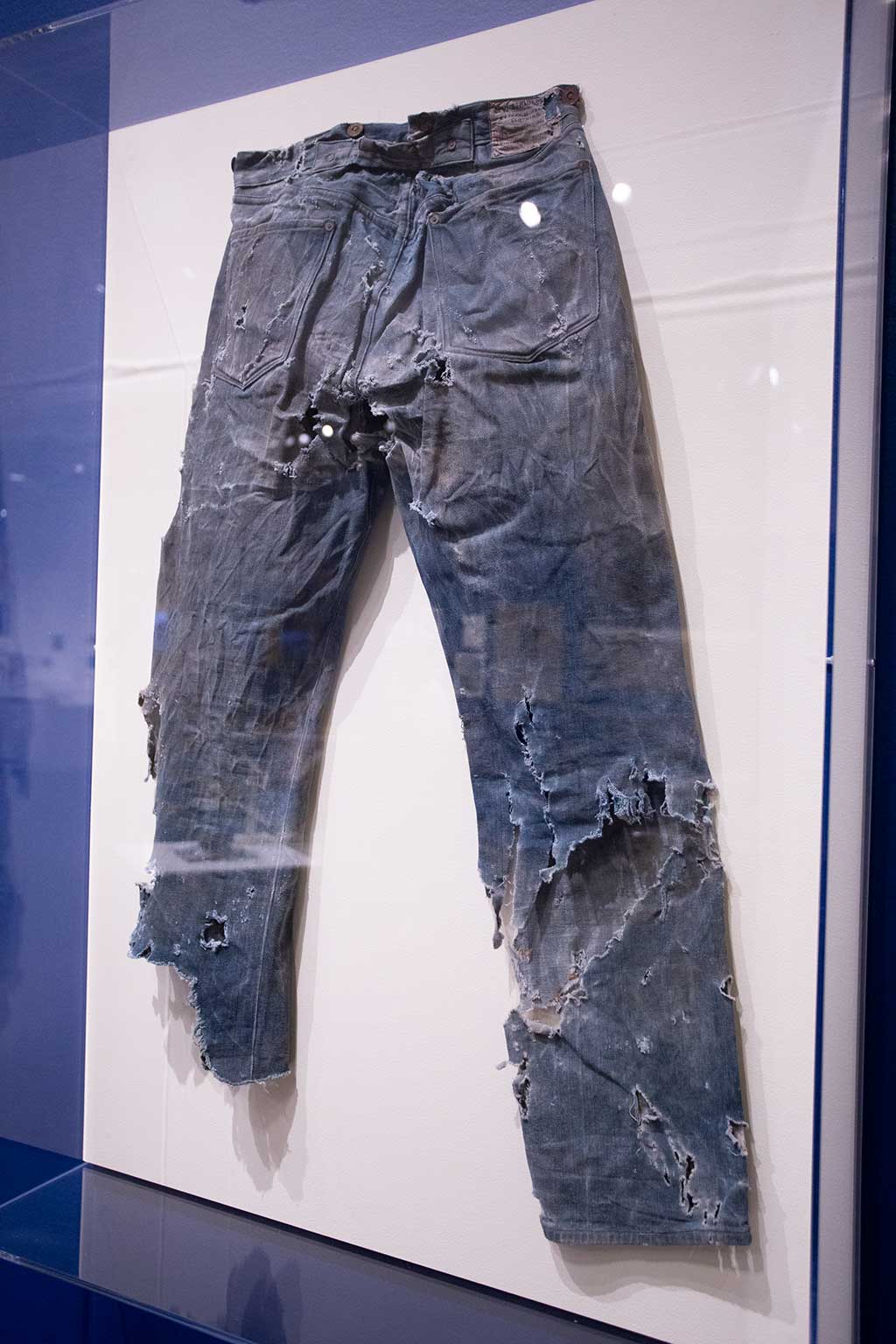 "These overalls, once worn by Klondike miners in Alaska during the 1890s, were found more than twenty feet underground in the late 1980s by miners Alf and Marlene Roberts while digging in their claim in the Yukon.

The area was also known for Ice Age-era remains, and later, the couple found two mammoth tusks, ancient bison teeth, and several giant bones nearby. These pants are a remarkable example of the preservation possible in the frozen Klondike wilderness." 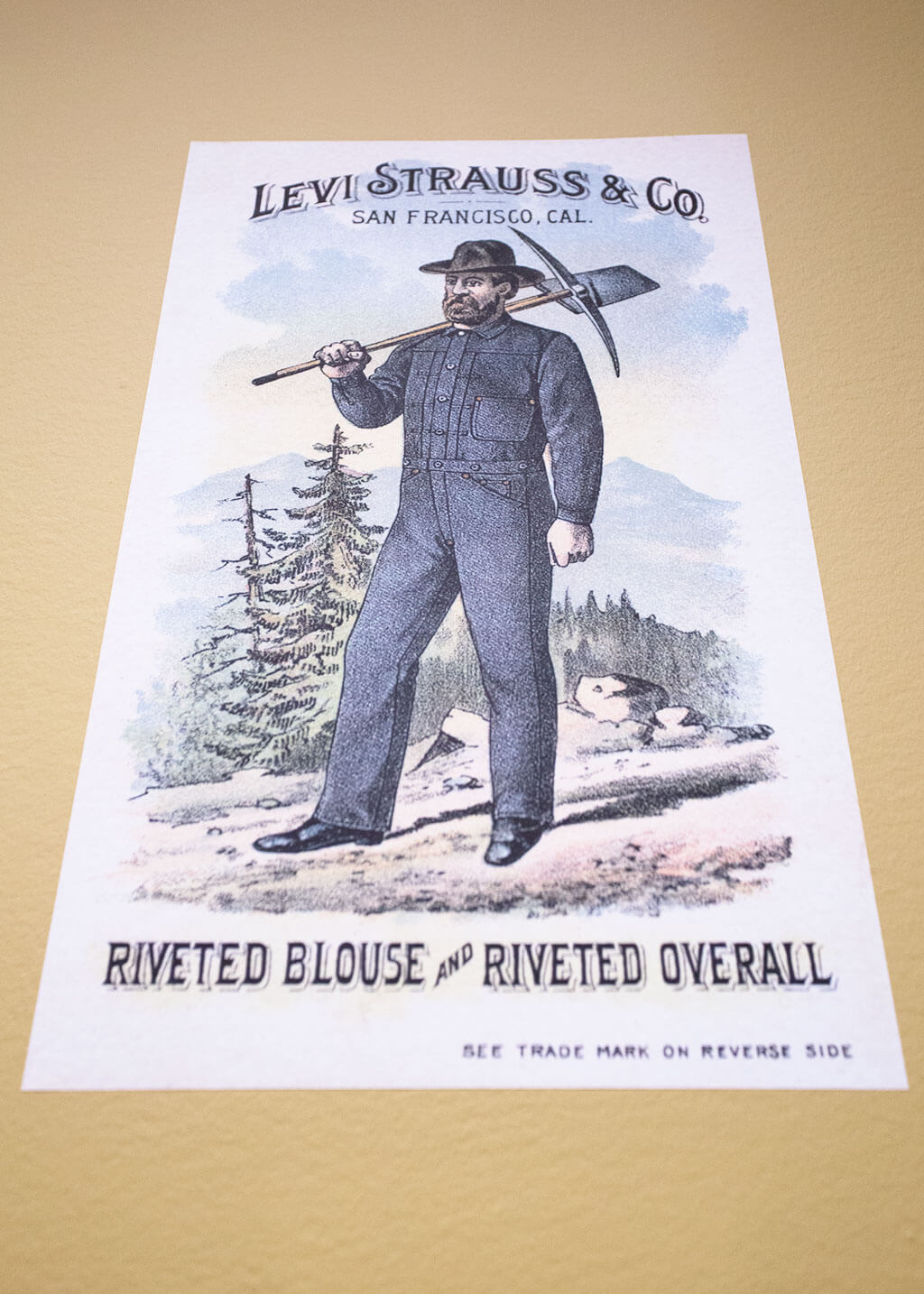 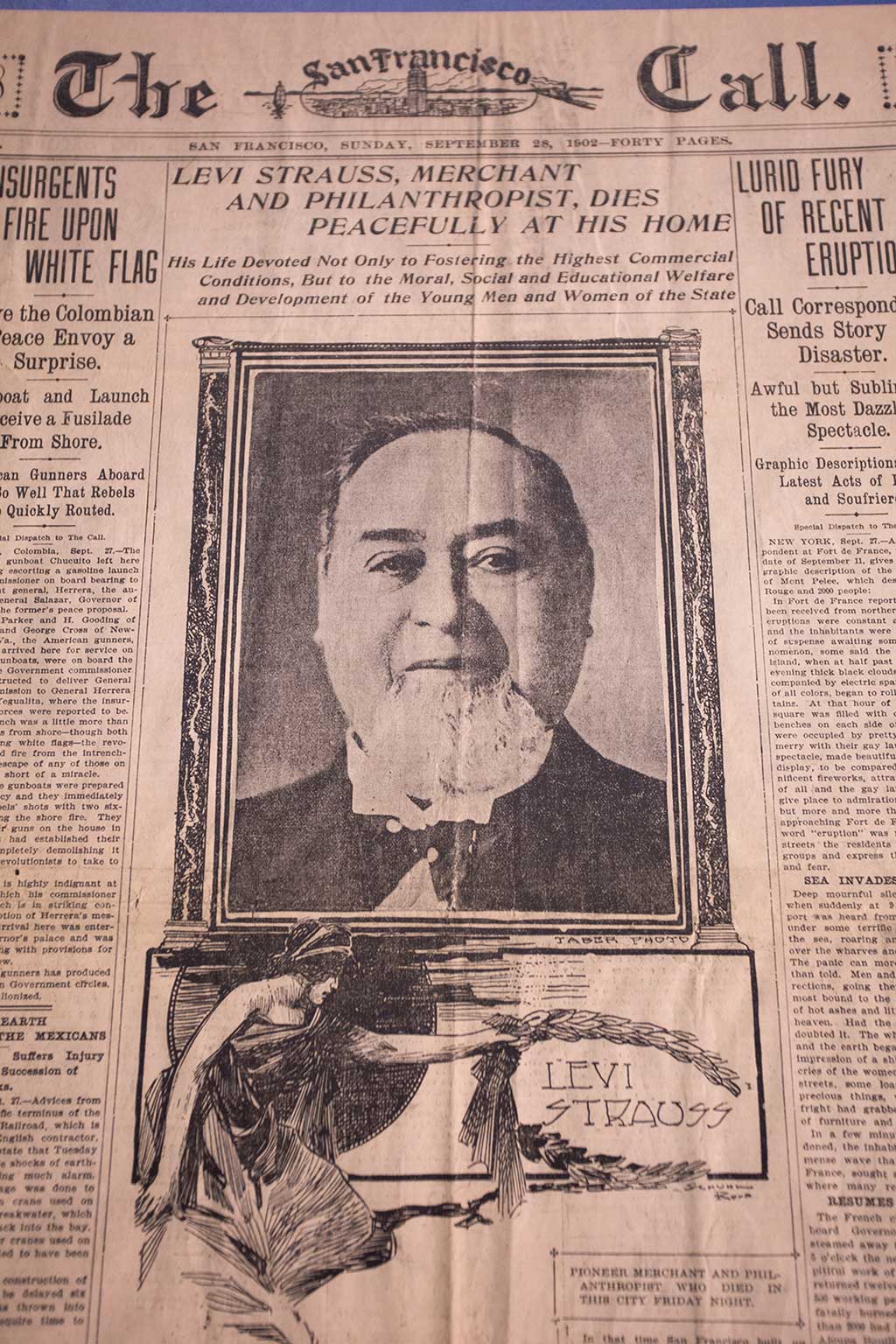 "Levi died...on September 26, 1902, at the age of seventy-three. On the day of his funeral, the company shut down so employees could attend the services...Levi's will benefited many local charities." 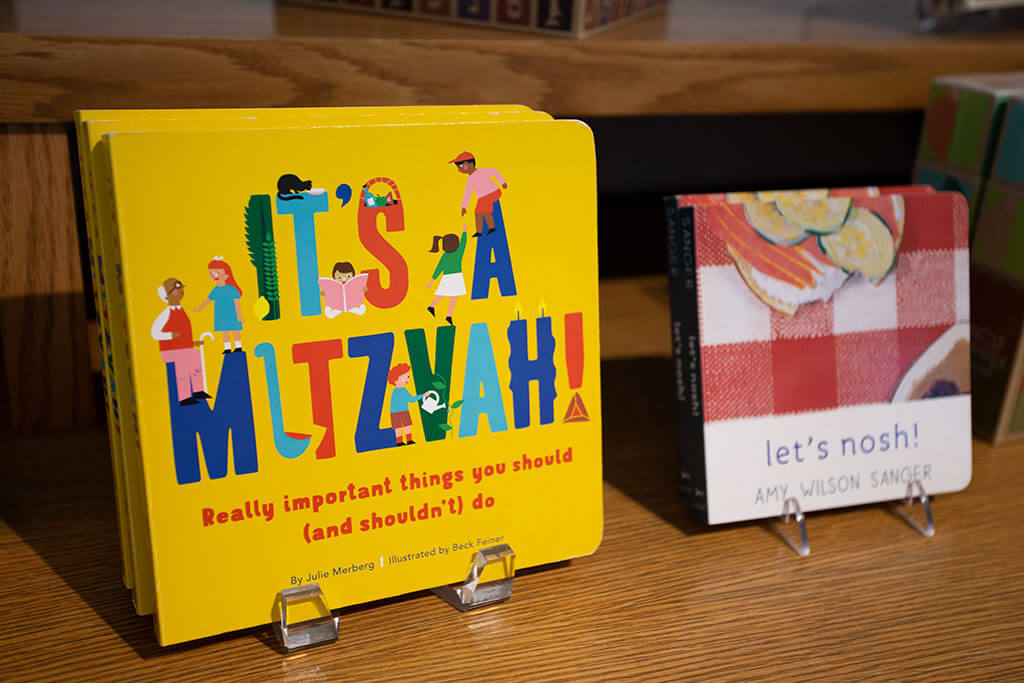 After spending several hours at the exhibit, we ventured down to the first floor gift shop to smile at all the Jewish-themed merchandise. Children's books, cookbooks, greeting cards, clothing, and of course, all sorts of menorahs, decorated the racks. 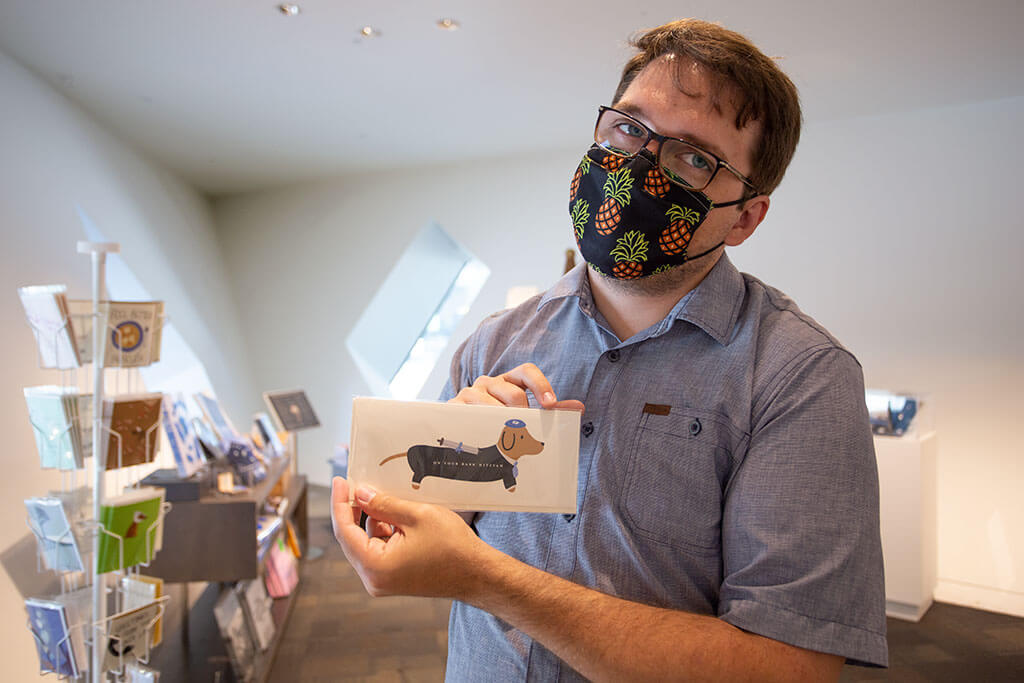 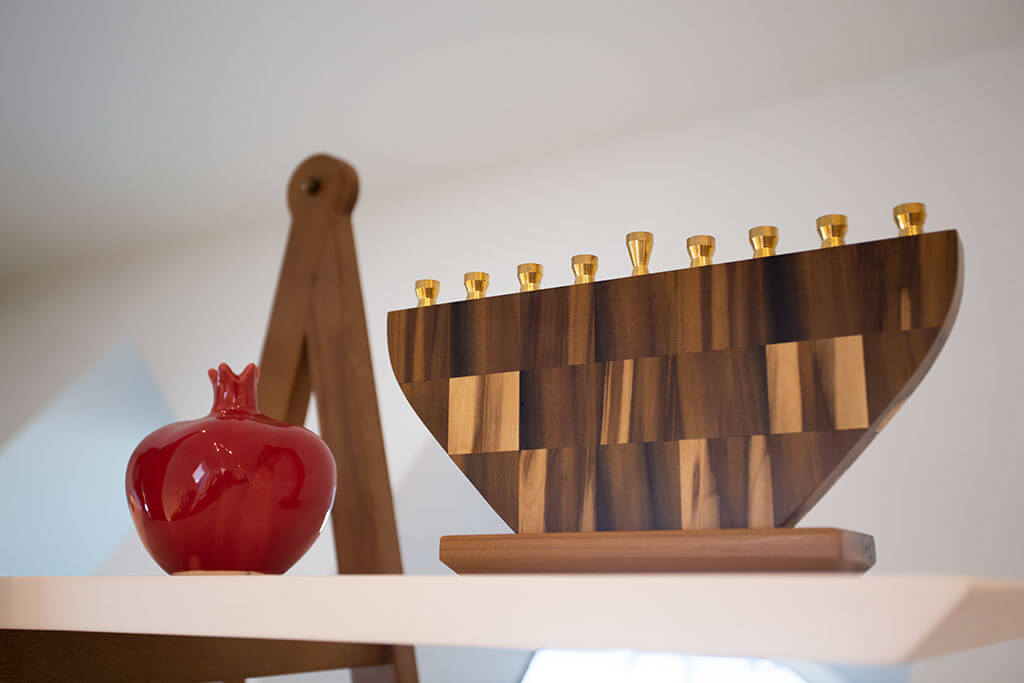 Did you know that the Jewish heritage is passed down through a Jewish mother to her children? If the mom isn't Jewish, the children are not automatically Jewish and the ritual of conversion is required.

This means if Brandon and I ever had kids, they would not be Jewish. Now you know why ethnically and religiously devote Jews encourage their children to marry fellow Jews, to continue the tradition.

You can read more about this fascinating belief here. 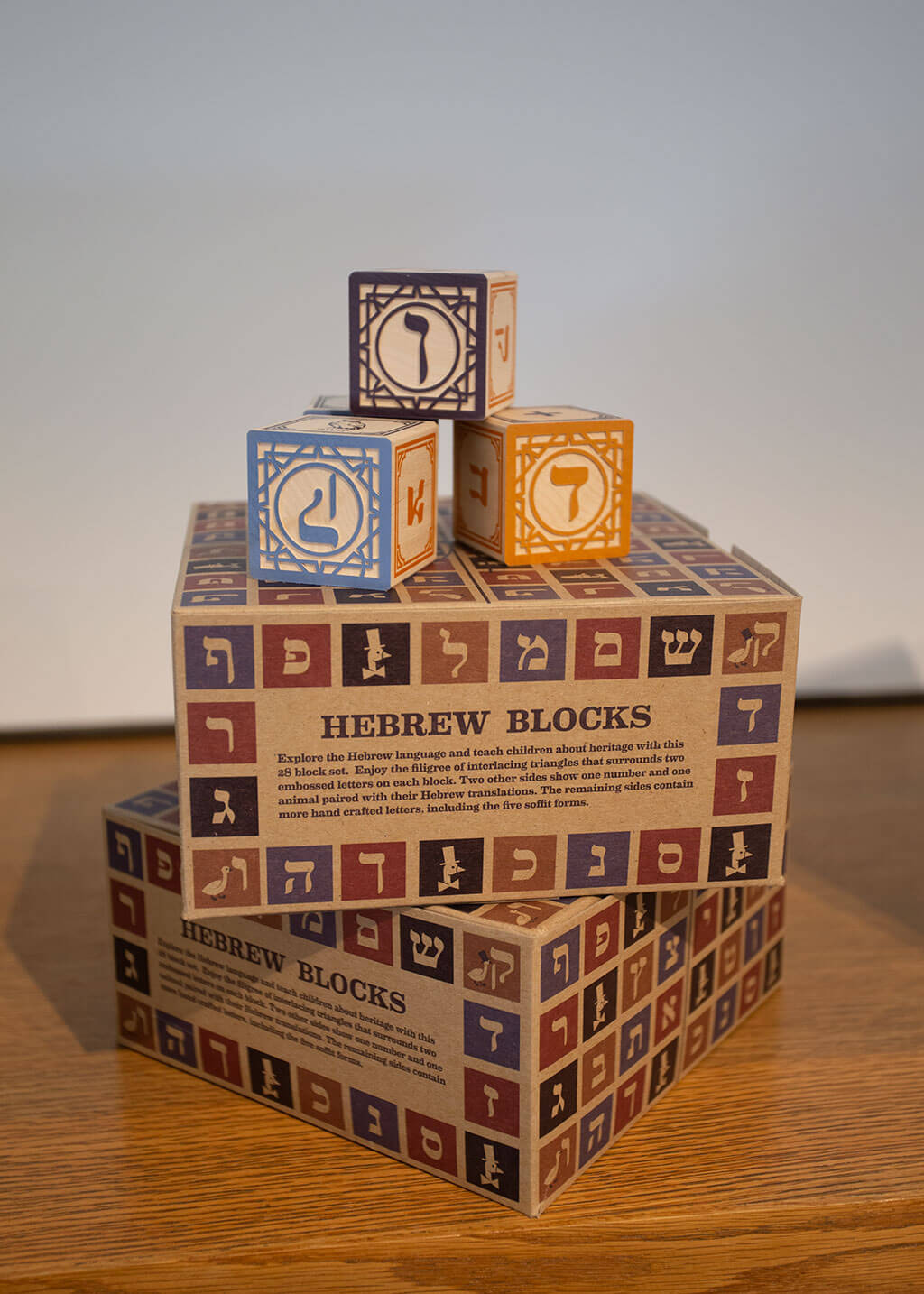 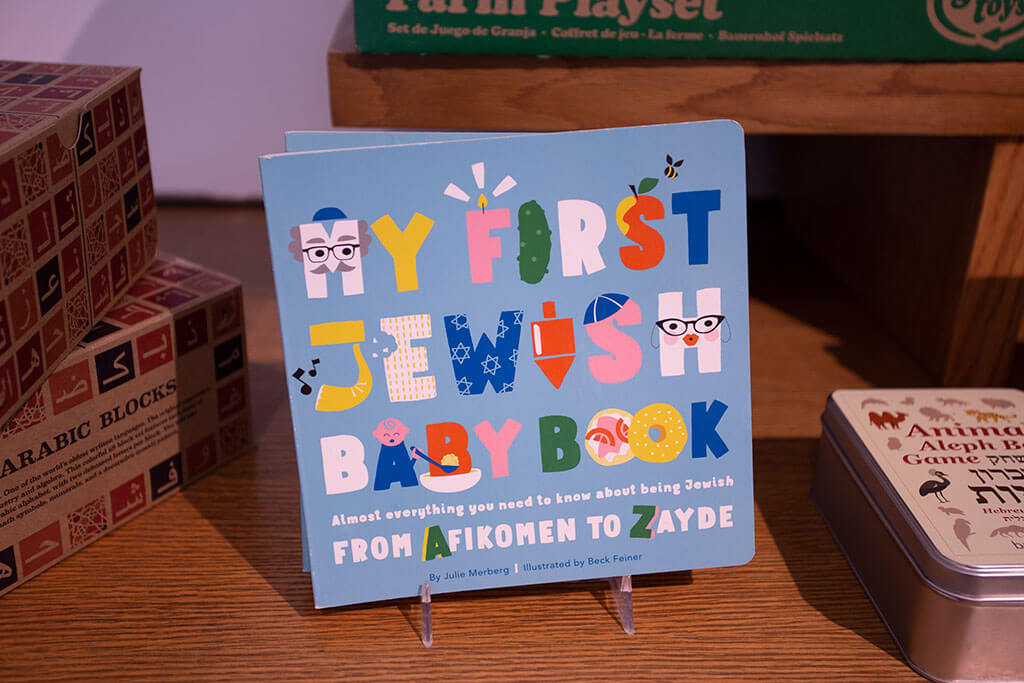 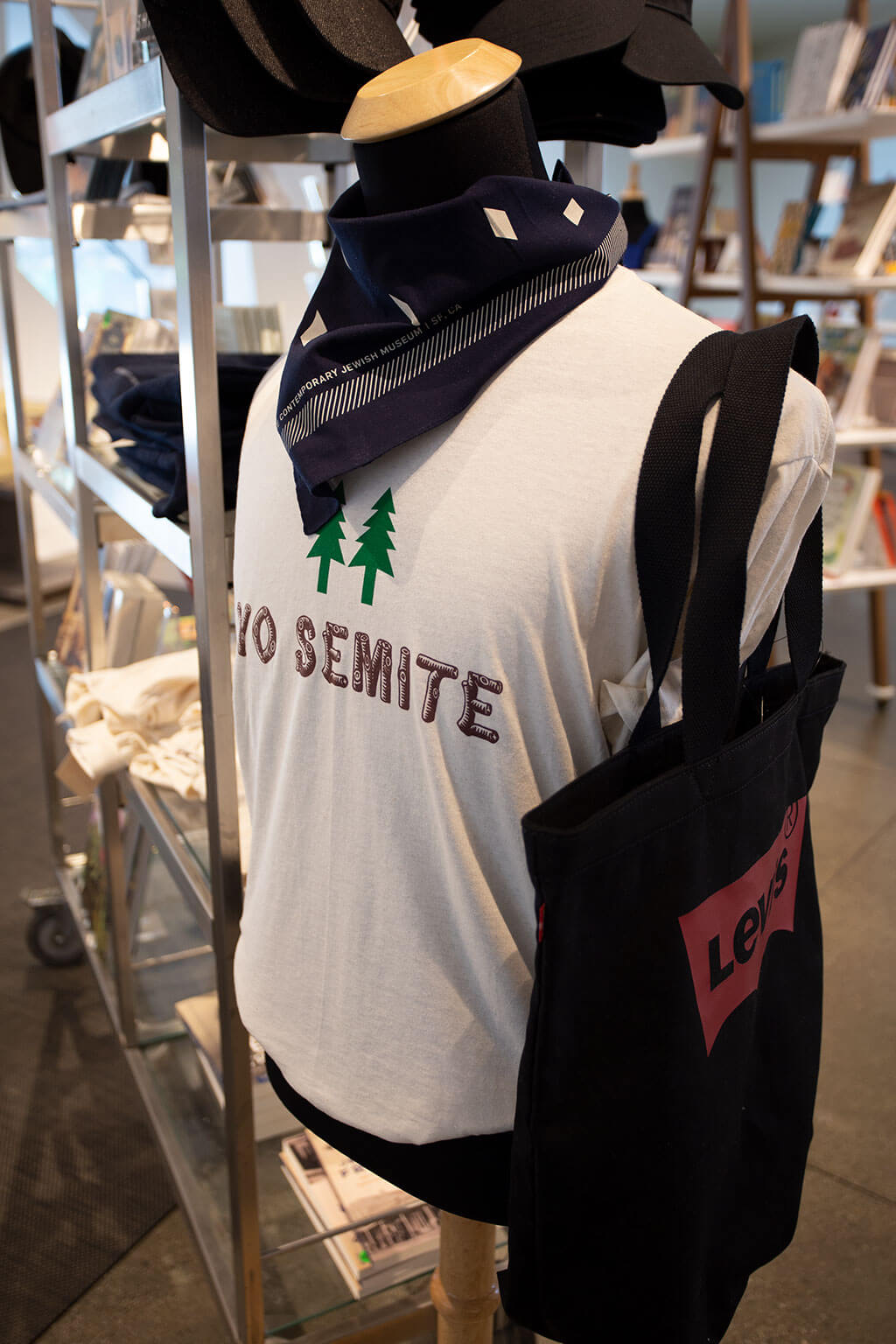 The Levi Strauss and Co. exhibit at the Contemporary Jewish Museum has two sections portraying different eras in the history of jeans - the early years and the contemporary.

Click here to read my blog post about the (relatively) modern side of Levi's jeans, from the 1960s hippy years to Madonna's famous cut-off hot pants.

Or stick around San Francisco for a bit and read about these fun adventures: